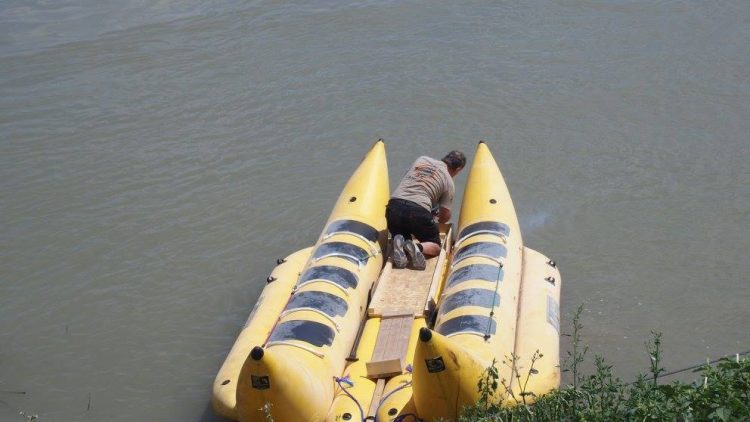 It was a beautiful morning.  I went off to get supplies and petrol and got back to find there was an international power boat race underway on the river which was closed to all traffic for the day.  I had a good breakfast and discovered that there would be an opportunity to leave at lunch time, between 12pm to 1pm.  So another late start. I went down to the pontoon to see yet more snakes patrolling around the Banana, making certain any thoughts I had of having a quick dip before setting off were cancelled, permanantely.

I set off.  The weather appeared to be perfect.  Not a cloud in the sky and no wind, just a slight light breeze.  Perfect.  Perfect for getting sunburned and attacked by huge horseflies and smaller flying biting bugs that were successful at making holes in my arms and legs before I discovered their presence.  It was a difficult voyage: hot, sweaty, with bugs attacking; and ships cutting corners.  I, or should I say the outboard, hit a submerged branch; the engine over-revved then nearly stalled.

I jumped to the back of the Banana and saw bits of branch trailing behind.  I cut the engine and lay down to disentangle the flotsam.  I failed to remove all the bits at first attempt so adjusted my position, dangerously close to falling in I managed to remove all I could see.  I was prepared to take this risk now I had my life jacket on.  Drifting down stream was lovely without engine, I estimated that the flow was around 3km, so for a few moments just listened to the birds and a man almost to far away to see talking to some cows, the sound of his voice carrying over the water more than 400m.

I restarted the engine after refilling the tank and set off again leaving behind the only sign of human life I had seen for an hour or so.  I passed through huge areas of desolate wild and isolated wilderness.  I never thought that I would describe forests and trees as desolate. Here I use the description because of the remoteness of the location would make any attempt on foot to find a way thought very difficult and entirely unpleasant, and there was little visible aninmal life and only  occasional birds; but there were lots of bugs.

Off to starboard a boarder control police boat lay at anchor under the trees near the limit of the river, the three policemen smoking and ignoring their fishing rods eyed my approach without expression.  I brought the Banana around into the stream, like the huge ships do when they dock, came alongside and a policeman grabbed the elastic cord to hold the Banana in place.  I cut the engine.  They were evasive, would not say which police they were, did not want to be photographed fishing and eventually directed me to a port 2km away where I should report my presence.  I arrived to find a huge Dutch ship, the Mitchel, tied up to a rusting hulk of a ship that had well passed its sell by date.  I went aboard the Mitchel and climbed onto the wreck, up a ladder, and found my way to a carpark, with a man sleeping in a car with the doors open.

He got up when he heard me walking past and directed me to the border control.  The Mitchel had been detained because the man had wanted to put some timber on board and there was a crew change going on too.  They had lost two days already and were waiting for the ‘control’ to be completed.  I was directed to an office full of cigarette smoke, where a fat man in uniform was watching cartoons on a television.  I was informed that I had to go to Apatin; 25 km father on to get my papers sorted.   When I left the man with the wood said I was lucky they didn’t take several hours to tell me that information.  I discussed the stupidity of the system and set off again into the evening.

I sent a one-word message to the motorhome: Apatin, and sailed off into the river of bugs.  Some hours later, having avoided a passenger ship, I arrived, and tied up next to a cargo ship waiting to be loaded.  The crew member invited me aboard and asked if I needed anything.  Yes, coffee please.  This was arranged and I spent half an hour with him.  I discovered I had no credits on my phone which was a surprise as I had checked earlier that I had plenty.  He asked if I had left my phone on as I passed the boarder, which I had, and he told me someone would have scanned my phone and taken the credits.  I could not send any details of my whereabouts now so decided to go to the centre of the town and wait there viagra pfizer 50 mg.  I sailed off and saw a huge steel jetty, 500m away; I went around to the rear of it and tied up.  The ramp led to the bank where a group of men were chatting and had watched my arrival with interest.

The ramp gates were locked with a pad lock, so, looking as cool as I could, I jumped onto the gate to nimbly climb over it, to find it was not locked and to my embarrassment it swung open.  I jumped down as gracefully as I could to regain my dignity, calmly said ‘oh, it is open then’ and walked up through the grinning group of men onto the top of the bank where a man was sitting on a scooter, apparently waiting to talk to me, which he did.  If he had held up a sign saying ‘Banana boat man’ or something like that, it would not have been out of place.

He immediately engaged me in conversation, telling me he used to be a sailor, and engineer on submarines and knew about a cream you could buy locally to ward off the mosquitos.  I told him the Banana had come from Rotterdam and I needed to go to the toilet.  When I came back I made an arrangement to have coffee next morning and sort out the steel required to stabilise the harness or the outboard.  I eventually found the motorhome after using the phone in the hotel next to the bank, by the jetty.  I parked the motor home next to the hotel which had Wi-Fi available free.  I decided to eat in the restaurant as I felt just a little off colour, that is to say I was a bright red colour and felt quite ill.

I ordered chicken, cooked in a cheese and herb sauce with chips and several veg, local fresh bread and several half litres of cold beer later helped me recover a little from the sunstroke I was clearly suffering from.  Paracetamol calmed my temperature, but I still felt sick, wobbly and very tired.  The bug bites and stings were itching and my face and bald patches were on fire.  My knees also had been burned and were a favourite place for the mosquitos to attack as they felt immune from being slapped.  Although I could not finish the meal, it helped to restore a feeling of wellbeing and optimism as, despite all difficulties, I had crossed from Hungary into Serbia, (with Croatia on the other bank of the river) the motor had performed well and if I did not ever get another lift I could in theory make to my destination under my own power, even if it would be entirely gruelling.  I was told I had to move the Banana off the quay and take it to the marina, or the very friendly nice local water police would be able to book their winter holidays in Chamonix, from the fines I would certainly get.

This done I went to find any officials at the marina but all was closed up for the weekend.  On the way back I was attacked by thousands of mosquitos.  My attempts to kill them all resulted in me flailing my arms around and looking like a string puppet being dragged along by a two-year-old.

The man with the scooter pulled next to me.  He handed me an anti-mosquito potion in a small tub.  I am normally very cautious about rubbing any old cream on myself or taking any medicines unless I know exactly what they are.  Sod caution, I grabbed the tub and smeared the greasy potion on every bit of exposed skin, including my eyelids and inside my ears.  I didn’t care if I had an allergic reaction, it could not be worse than being found next morning a dead, a dried out, blood less corps to be used in the TV program ‘Bones’.  I thanked him and confirmed our coffee appointment for the following morning.  The evil goo worked, the mosquitos contented themselves in hassling me by trying to die in my eyes, whine in my ears and bite the hell out of my ankles through my socks.

I emptied half a can of fly spray into the motor home, used the loo in the hotel and went back to be bitten by the survivors who liked the stinking grease I had smeared all over myself.