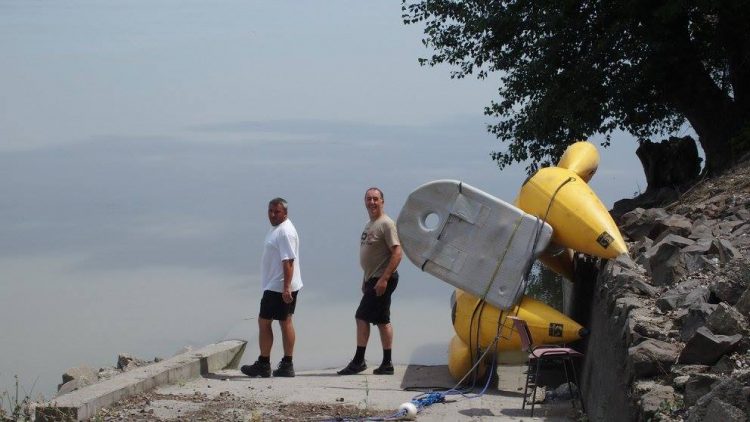 I went to building site early waited for the builder who arranged the meeting with the outboard moer salesperson and got his phone number.  The builder phoned him for me.

The guy said he was busy and would sort it on Monday – I pointed out that I would be leaving today and would leave the outboard with the police, buy another outboard and return for my money when my trip was over in a few months’ time.  I got his address and went to his house.  Same story about Monday, but when his wife saw me filming she phoned and he came.  He was doing his week-end job and was not messing me around.  He offered to give my money back when he realised the motor was actually broken and was not my fault.

I bought the motor he used for his own boat, an almost unused Suzuki 5hp; lighter, more reliable and more than twice the price.  I weighed the cost of looking for another motor plus more delay and bought the outboard.

Back to the Banana having visited the library (Gyula not there), stocked up on fruit juice and bought more petrol cans.  I loaded up the Banana with my supplies for two days, and set off, forgetting my life jacket; which I missed as soon as I got out into the main stream of the river. I eventually got away at 1pm and decided to make as much progress as possible.  Hot sun, flies, horse flies and the great grandfathers of the horse flies attacked.  Cramp, dead bum and a back ache plus holding the throttle and finding a place that was comfortable to sit and control the Banana was impossible all added to a very uncomfortable journey.

Vibration from the throttle made my whole hand tingle.  I had to constantly change direction with the motor as wind and current changed; after two hours the petrol ran out suddenly and I had a chance to examine the outboard.  I found a screw that held the throttle open and another which tightened up the steering.  When I set off I found a steering position where the Banana ran straight for a while and lessened the times for adjusting the direction.  I discovered, rather like riding a bike no hands, that changing my position on the seat I could alter course and had no need to hold the throttle.  Lots of attention was required to avoid branches and keep a good direction.

There were occasional small boats but not much shipping.  Once clear of the town there were only a few small villages and the odd shed like structures for fishing.  There were views of the Hungarian way of life; clean well-kept hamlets with boats all in good order on small jetties.  I saw people fishing under trees near the river banks, and nuisance power boats, water skiers and jet skis who caused waves that were a problem when encountered.

There are parts of the river that have swirling currents and tourtured surfaces, giant lilly leaf like circles of smooth water with no ripples in them and ripples as though the river was passing over a step and the water was falling down onto the next level.  Passing through caused the motor to struggle then over rev as the resistance to its efforts changed rapidly.  The Banana was bounced around and pushed from side to side.  At one point the petrol ran out just after I passed such a place.  As I refilled the tank strange sounds came from the churning waters.  Plops, splashes and gurgles came from no apparent place and I was reminded that the Danube is a mighty river of which I knew very little, other than I suspected these were dangerous places and it would not be a good idea to try to swim here.

Eventually I arrived at Baja, although on approach I had no idea of the name of the town or how far I had got down the river prix viagra pharmacie france.  There were all the signs of river industry with collections of barges and ships anchored in the river, port activity with a few ships being loaded.  I searched for a destination, the sun was going down and I knew I had to find a place to stay the night; and get away from the mosquitoes that would soon be out in force.

There was a park area on the left bank and I noticed an opening.  The opening was a small river joining the Danube so I decided to explore.  The park continued on the left bank and there were small neat houses on the right.  These gave way to tents and people camping, having BBQ’s and swimming.  Further along the river was cordoned off to power boats and there was an inlet on the right which some large boats and small ships permanently at anchor.

The headland between the two was occupied by a restaurant with its own jetty.  I tied up there and went to see management.   No problem to stay.  Parking around the back for the camper overlooking the inlet and ice cold beer on tap.  I waited outside for the motorhome, was eaten by mosquitoes and after dark the motorhome arrived.  More beer and bed.