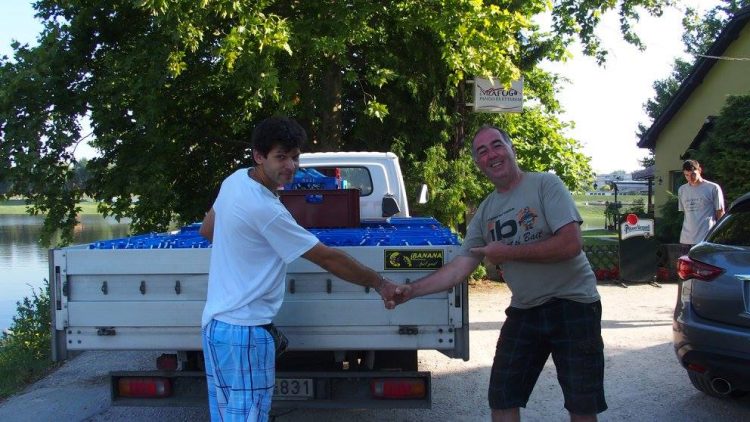 The morning came bright and hot.  Feeling sick and wobbly, I felt as though I had a Halloween plastic mask on my face.  I got up and drank a litre of orange juice, tended to my wounds and bites and had coffee.  I used the internet until my man turned up half an hour late.

After I bought him coffee in the restaurant I set off to visit to the town. I made an investigation of where to go to get papers signed, filmed around the centre, had a huge burger like dollop of food, served by two enthusiastic women who could not speak anything other than Serbian.

They were great fun all the same and entered into a game of trying to explain what the things were on offer on the menu, most of which were variations of minced meat with minced meat or cheese, bacon or minced meat all served in a bun like a kebab; I chose the minced meat in a bun like a kebab.  The meat came in a ball which they hammered flat and round then folded over with a lump of cheese and bacon bits trapped inside, all grilled and served with far too much salad and a paste, yellow in colour spread over the whole.

I failed to finish it, mostly leaving the bread, I decided to have an ice-cream in an attempt to have a real reason to feel sick and went back to the river front for more internet, feeling sick.  There was a racket of shouting coming from under the trees not far away.  I filmed the local drunks yelling at each other then went off to visit the year old church on the river front, watched very closely by a man on the footpath.

He surveyed my actions as though the church was his personal property and I was about to steal it.  I decided to see if I could find an official who could stamp my passport.  I asked lots of questions as I went along the river bank and eventually found some local police and had a chat, filmed them and made an appointment for the following evening to visit one of their houses to film his iron works.  I thought to myself what an odd sort of journey this has turned out to be.

They told me they could not do the paperwork but, if I ended up staying delayed in the town until Thursday, I could go and visit the beer factory where they give free beer to the locals all day.  I asked if they have April fool’s day twice a year in Serbia?

I returned to have a meal in the restaurant, ordering the beef, and met two couples who were making the same journey; they invited me to join them and having exchanged anecdotes we both discovered that we were on the same journey, just different methods of making it.  They invited me to go with them in the morning when we had all completed the paper work.  We shared some more stories, drank some wine and I filmed an interview with all four.