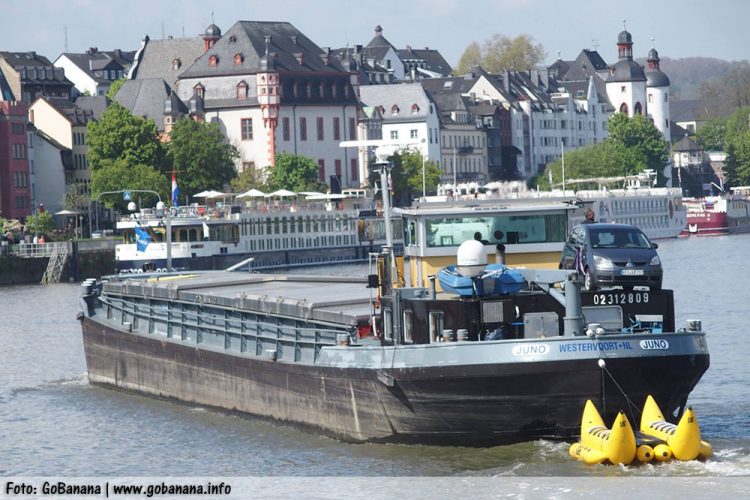 I spent the night in a car park next to the hotel. After breakfast I went back to the hotel to check emails and post bought a coffee and went back to the city.  I had arranged a meeting with Peter the photographer a 2pm.  He phoned me during the morning to make sure I was still available.

Right on time Peter was there and the photoshoot began.  He took me across the lagoon like inlet in his boat and I clambered onto to the pontoon, where I was only the day before.  I collected the oars and motor I had hidden and went to the office to talk about leaving the Banana for one more night. No, nicht, nine , niet, etc.  it is forbidden.

The owner of the yard was not at all welcoming, his staff and wife were.  They looked embarrassed as their boss made a fool of himself insisting the Banana should be removed asap, like now.  I said thank you for his hospitality and left.

Peter asked me to sail around the lagoon whilst he photographed every angle, mostly with the older buildings in the back ground.  After a comprehensive photo shoot he suggested we could go around the harbour and ask ship captains for a lift.  This we did for about twenty minutes before coming across the owner of the Jura, a freighter.  They were bound for the Mosel River and its beautiful valley and could drop me off in Koblenz. 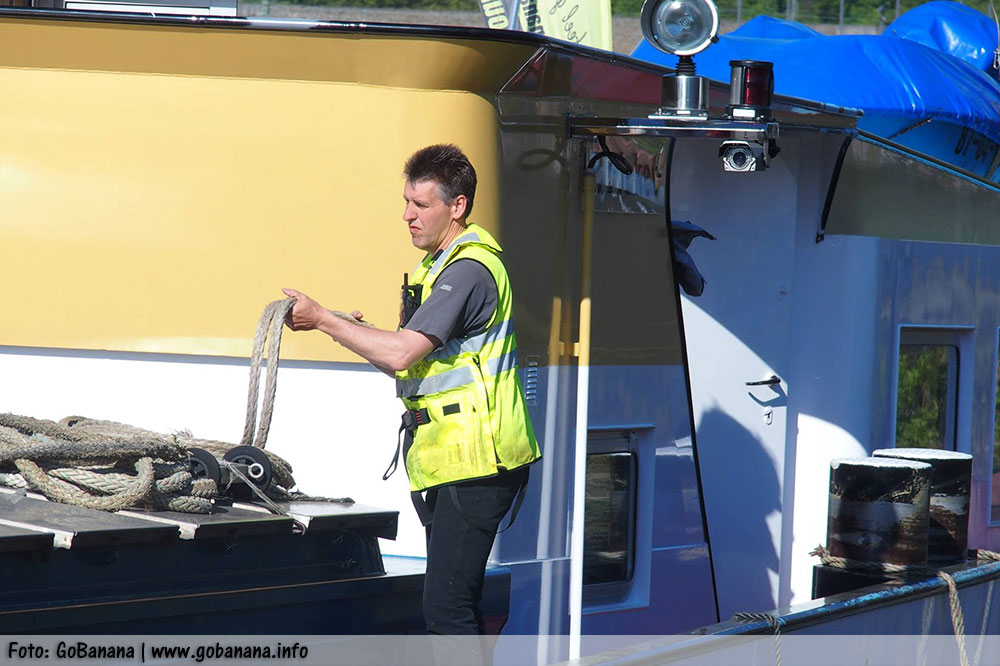 They were unsure, afraid about the laws of towing and more fearful of the fines they may get if they infringe a shipping regulation.  Eventually they agreed to take me on board and I arranged with Peter the complex phone calls to all the authorities so I could move around the harbour using the small battery powered outboard.  Back to the motorhome to set up its movements and move it near the river for the night.  Peter phoned and I met with him at the inlet.

Any boat can tow the Banana if it has a permit which is granted when the ship is commissioned and registered.  Peter; with his 4m aluminium boat and outboard motor was not allowed to tow, so I made my way along the port sitting side saddle on the plank that holds the outboard in place, with my feet almost touching the water.  Several ships came along and I had to steer into the bank to avoid the wash from the bow but mostly to assure the captain I was ok and not in harms way.  After the third ship glided past I arrived at the Jura with no mishaps, just cramp in my legs and a stiff neck from looking to the right for an hour.

I secured the Banana to the wharf wall with a bungie and passed up all the bits that would get washed overboard in seconds.  I untangled the mess of the rope that the police had used to tow the Banana which had ripped through all the eyelets on one side, and scrambled up the wall which was not a simple manoeuvre.  Having secured the main tow rope with the captain I had a brief chat about when we would be sailing and set off to spend the night in the motor home, which I parked under the suspension bridge.  At four in the morning a drunk stopped his car a 50m away.  He threw a bag full of empty bottles which scattered across the tarmac.

I could tell it was a man when he started wailing with a sing song racket not too different from what you hear from the distorted calls to prayer from mosques that don’t have a decent sound system.  I dressed hurriedly in case his bottle throwing included the motorhome as a target.  I had just got my socks on when he drove away.  As you can guess, I have not gone back to bed and am typing this instead of getting a lay in till 6am.

There is a strong wind and light rain falling, and I can see a huge passenger ship making is way down the Rhine, its lights glistening due to the rain on the motorhome windows.  It looks like a horizontal block of flats, which, I suppose is what it is.