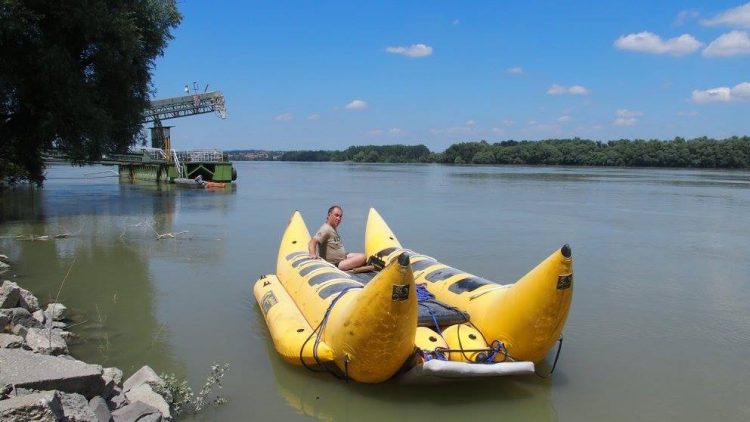 Time for action.  After breakfast I drove into the town and methodically drove around all the industrial buildings it had to offer.  There is a good amount of small businesses, wholesalers, buiding supplies, garage and small industrial units.  My problem was that I had to stop and go inside to find out what activity there was going on inside.  The usual clues such as signs were useless to be.  Very few had anything I recognised so simply had to stop, park and go and have a look.

On one small set of factory units and workshops I stopped and was asked what I  was looking for.  This was a mistake to get involved in trying to explain that I had a Banana which needed modifying to have a keel and outboard motor fixed to it.  Making a gesture to describe a Banana shape, then miming an outboard motor, including engine noise impressions, whilst pretending to sit on an imaginary boat being driven forward in the river left most of them dumbfounded, and just a little worried about their peronal safety.

I was brought to someone who allegedly spoke English.  She didn’t, and worse, she had obvisously somehow got a reputation of being a linguist which was now being destroyed in the face of having a real Englishman to talk to; and she was embarrassed.  I am still not sure what activity was going on in that unit, but the large group, no crowd of people there seemed entirely disproportunate to any activity that could be done there.

I must also note they were a strange lot; physically.  All were dressed in working clothes, ready to manhandle something, wield a shovel or cut grass;  nothing unusual there except, they were all small or fat or tall or very short or skinny or bald or hairy (the women that is) or all of these things (not tall and short in the same body though) they looked like extras in Lord of the Rings happily without swords or bows.  They gave me directions to a workshop that may help me, that didn’t exist, but they thought this would be helpful to give me some hope for a short time that there might be a solution to my Banana problem.  I left in a hurry.

I eventually found a workshop that had an outboard motor.  I was the right size, but had seen better days.  They didn’t know if it was for sale, but if I had cash, it would be.  The negotiations lasted two hours, and with help of one of their friends on the phone a negotiation for price was made.  I said I needed some facilities to make some system of attaching the outboard to the Banana the well dressed saleman in unit that was really a car repair workshop simply said he didn’t want to help me, he just wanted to sell the outboard which was not for sale as it was very good and was only used as a spare etc. etc. so I said, if he didn’t want to help that was ok, I would find someone who did.  Bye.

One of the workers had shown me an ad for outboard engines to make a price comparision.  It was a small business in the town that sold second hand motors and, having got hold of the paper, I left, programed my GPS and arrived right next to the vinyards and space where the rock concert had been.

The boss was not there, but they reception was helpful and the worker seemed to understand that I would need help to mount the outboard should I buy one there.  He said come back to see the boss tomorrow morning, introduced me to the wife of the boss, and I left.  One last question, ‘would they take euros?’  ‘No, but Tesco is open tomorrow’.