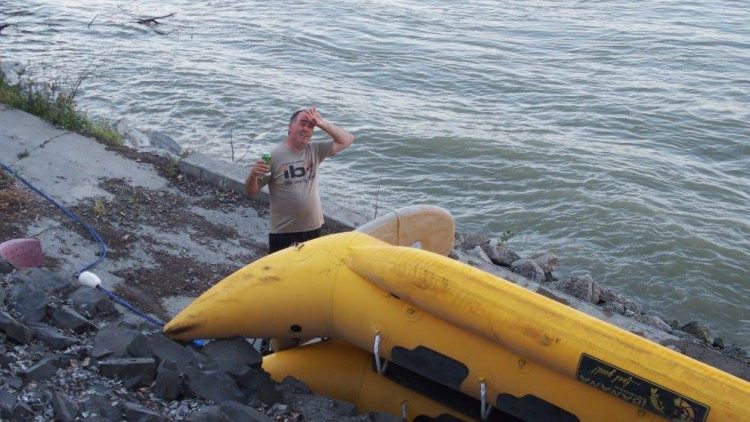 Last night, after successfully constructing the platform to hold the outboard motor I decided to give the Banana a test run before leaving this morning.  As I moved the Banana down the slipway a half metre long snake swam slowly from underneath and disappeared from view.  Before doing anything else the Banana was inspected for any close relations that may have come around to visit their friend who was under the Banana.

I assembled all required for a short trip on the Danube, installed the outboard and secured the petrol tank etc., all fitted well.  I started the motor with some difficulty, cast off the tow rope and pushed the Banana into the fast flowing river.  I pushed the leaver for reverse and let the Banana chug backwards to about 10m from the bank.  The motor stopped.  It would not restart.  The Banana gathered speed and started to turn in circles with the flow of the river.  I abandoned trying to start the motor, grabbed the oars and within minutes gained the bank, having travelled about 200m downstream in the process.

Tied up to the bank, where the snakes live in their holes, bask in the sun and generally hang around to scare me; I spent two hours trying to start the engine, which ran twice for no more than 10 seconds ou acheter du viagra sans ordonnance.  I was sweating and attracting the attentions of horse files.

When the mosquitos came on the scene I gathered my life jacket, oars and petrol cans, and headed for the motorhome.  I had wrenched my back, the heal of my hand was swollen where I had caught the seat whilst ripping the starter cord full force, and, I was very angry.  I don’t do well with machines that don’t perform their basic function.  Engines should start.  If they don’t, they are simply pieces of metal and should be in a scrap yard; beaten with hammers all along the way there.