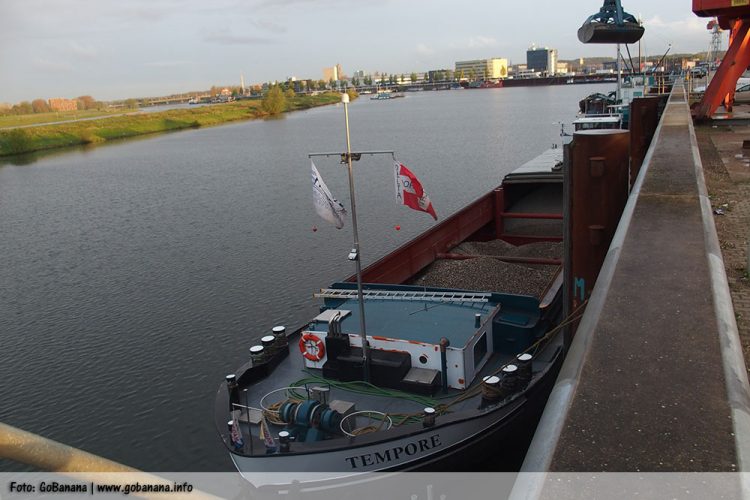 Today has to start during last night with a text received whilst in a kebab snack bar in the suburbs of Arnhem.  I had spent most of the day sorting out small problems and visiting ships, boats and small marinas along the port inlet and quay where the larger cruise ships take on board their visitors.

Kings day, the King of Holland’s birthday is on the 27th of April and is an event celebrated with great enthusiasm.  Arnhem was setting up its carnival like stands and scaffolding for discos under the John Frost bridge, famous for the Operation Market Garden battle for the bridge and town of Arnhem itself.  The message was from Eelco; telling me that the freighter next to his house boat was illuminated and people were going on board.

I had up-loaded text to my website and was answering emails and Facebook chat when my phone beeped.  I packed up; paid up and went up river.  The lights were on and everyone was at home, that is the lights were on inside the ship, but outside, the dock side steep stairs descended into a shadowy abyss with the black swirling waters waiting for a misguided slip to take me down into the almost invisible bottom of the stair, submerged by the higher than usual river.

I called to the people inside and when the dog stopped barking, I told my tale.  I was warmly received and was invited to put my head into the wheel house through the open door (I have learned not to go into ships accommodation wearing shoes) and chatted whilst their fluff ball of a dog tried to lick my belly button.

They agreed to take the Banana and we arranged to tie it on board the next day, when they had finished the process of unloading 1,700 tons of gravel with a crane using a grab bucket, two tons at a time.

The next morning Eelco and Nicole invited me for breakfast, but I was up much earlier and was sorting things for the trip across the river from the marina to the dock mooring.  The work had already begun with the crane swinging back and forth dumping the gravel into a hopper which was fed onto a moving belt and transported on a gantry to a ready mix concrete companies compound.  I had a coffee with Eelco and Nicole, then went with Eelco to the marina to move the Banana with the tiny battery driven outboard.

Despite its size the small propeller pushed the Banana, with the two of us on board against the cross wind at a reasonable speed.  The Banana sits very lightly on the water and any small breeze sends it in all directions so steering is not easy.  I headed for the starboard bank, to the right up river, so as to pass any other boats on the right.  Murphy’s Law was in full operation that morning and as I steered my slow, unresponsive craft a massive floating crane was being pushed towards me.

The pilot waved at me to pass to the left – this usually happens on the river when the ship going up stream has the right to pass through slower moving waters.  I turned access his oncoming bow as ordered, which was entirely against my survival instincts.  At my speed it would be a close call, but with a changing breeze I knew I could easily have been blown towards the crane.

It wasn’t a near miss but it felt like one, sorry Mr Murphy, I saw what you were up to and steered at 90° to the barge and crane which put me off course a good deal but I didn’t become a tug’s breakfast.  I got to the boat and one of the children helped tie the Banana to the stern.

I spent some time with Eelco and discussed music for the videos, with a view of working together on some future projects.  I checked with the captain how long I had before they sailed then made a signal to the driver of the dock crane to ask if I could come up and have a chat.  He waved me up.  I filmed a conversations and went back down to Eelco, who was amazed I had been invited into the crane cab as this was against more rules and laws that he could think of.

He had asked to go up and had been refused.  I had arranged with a cruise ship captain to the company headquarters at the western end of the quay.  The receptionist remembered me phoning the company months earlier and was surprised that I had actually turned up in Arnhem.  She had been forewarned by the captain that he had met me and had directed me to the office.

I had a brief chat and left messages for various mananages and set off back to the dock with half an hour to spare.  I made final arrangements for the motorhome and went on board the ship, to meet the five children of a charming couple, and their affectionate dog.  The one crew member was an ex-soldier who joined us for a lot of fun a laughter whilst we sailed up river into Germany.

They left me in a dock with a free marina at Emmerich am Rhine.  As soon as the Tempore turned back into the Rhine, all on board waving goodbye, I went to speak to the captain of the huge ship tied up on the quay where the Banana was resting happily against its steel hull.  The captain spoke very little English or German; he clearly had a problem with the engine and was not a happy bunny.

The slanting freezing rain didn’t help the conversation and he just grunted something and went back to the engine room.  I went off to seen Emmerich, met a journalist who invited me into the newspaper’s head office and was delighted to have a mad funny story to write handed to him on a plate.

We went into the town square and I stood infront of the town hall for photos viagra 100 mg posologie.  That done and the motorhome met I headed into the center for the evening to have some fun and make some contacts, do some publicity to find a boat and ended up going to get my guitar, return to a bar and sing a German version of the wild rover…