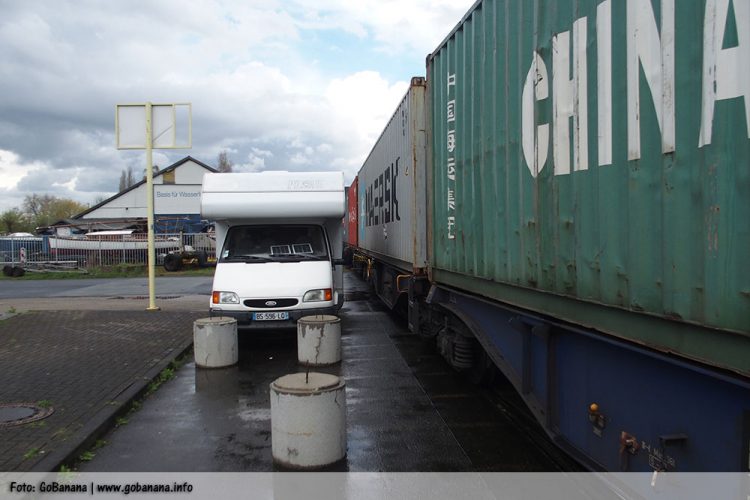 The night at the bistro went very well and ended with long goodbyes and hugs from the owners.

The ship was actually starting to load at 5 am, so I set up my travel bag with cameras and personal stuff.  The ship was not in the same marina as the Banana.  So I went back to the RhienWall Terminal building to ask where the ship was.  It was being loaded with containers on the other side of the container terminal in the larger dock.  I realised I had to get around from the marina to the dock by passing a headland, enter the Rhine and go into the dock area.  The Rhine here was moving at about 7km/hr: the motor I use with the banana pushes along around 1km/hr, which means that if I attempted to sail around the headland I would go backwards at 6km/hr; and with the wind blowing towards the bank the Banana would be sent spinning and bouncing all the way back to Rotterdam.

I decided to sail across the marina and beach the Banana near the point then tow it by walking along the embankment.  This idea started out fairly well except when I was half way across the large freighter at the quay opposite set off and I found myself competing with a 80m long ship.  I cut across the stern and went through the bow wave.  The turbulence caused by the ship accelerating away made keeping the banana on a straight course, with the wind attempting to blow the Banana back to my starting point.

Eventually I arrived at the bank and made several unsuccessful tries at finding something to hold onto whilst getting off.  I managed to grab a large stone after steering directly at the bank then throwing myself at a rock and grasping it, at the same time pulling the Banana onto the rocks by drawing up my knees.  At this point I was starting to think leaving behind all my equipment was a sound idea as there was a very high chance I would fall into the dock.  With the Banana provisionally berthed I repositioned the batteries and mounting plank, and set about towing the yellow plastic fruit around to the headland only 25m away.  The rocks and chunks of stone were loosely dumped to form a breakwater for the quay.

They were slimy and very slippy, and moved easily as I tried to step on them.  The wind blew the Banana towards the steep embankment so it snagged on the rocks, or the cable lodged in between the stones.   I looked like someone being attacked by a swarm of wasps as I staggering forwards, slipping and flailing my arms to gain balance then the tug of the snagged rope pulling me up to a stop and causing me to loose my momentum.  I made very slow progress and 45 minutes later I gave up when I got to the point as I realised that the wind and river flow would make it impossible to make any progress alone.  I had hoped to reach the ship under my own steam so as not to bother the crew at a busy time; but there was no other solution that I could see so I set off to the ship after dragging the Banana up on to the embankment and securing it to a steel post.

A crew member on the Vagabond, a truly huge ship, was very helpful and came with me to look at the situation.  He pulled the Banana along after I dived on board and steered away from the bank, pushing the Banana away from the stones with a paddle.  We made good progress until the captain saw what we were doing and yelled at us to stop, go back and wait in the marina on the wharf near the entrance.  I used the outboard once clear of the swirling waters of the Rhine, and with the help of the wind quickly cross over to the wharf.  I rammed the twin points of the Banana into to a mooring dolphin and clung on to a bracket, keeping the Banana in place using the grip of my knees on the inflatable deck.  Immediately, a man in a fluorescent jacket, with an official looking badge in it, came purposefully down to the wharf and headed in my direction.

I had a conversation full of rules, laws, regulations and must and must not do type of instructions.  He was working up to dishing out a fine saying I could not stay on the commercial part of the marina; when two things happened to him at the same time.  First, one of his friends walking past up on the sea wall cheerfully called out what a great night she had had singing in the bar with me.  The second was that as he pointed out I was in the wrong place for Bananas to be floating around with their owners clinging on to a steel posts, a huge ship rounded the headland and started to come along side.  I pointed at it and said that my taxi had arrived.

I waved an enthusiastic bye bye to the lady on the river wall and set about steering toward the vast steel hull of the slowing ship.  The poor chap could do nothing but weakly smile as the Banana bobbed about at the side of the ship and his hopes for imposing a fine vanished as I made my preparations to escape.  The ship glided within 1m of the Banana, and I looked up 4m above my head at the grinning crew who were about the throw a rope thick enough to anchor the ship.  The rope crashed down right next to me and I looped my tow rope onto it with a very inadequate knot.  They pulled my rope up with theirs and tied them together with all the skill of a real sailor.  I clambered up and down a ladder that was hooked over the side for me, so I could pass the motor and paddles up to them and then finally hauled myself onto the shelf like path that runs around the deck.

The intention was that I would go around the headland, hook up the Banana on the ship and then go to the office to sign in, and then out of the complex, pick up my cameras, phone and wallet etc. that were in the office and go back to the ship.  None of this happened the way it was planned, and as I stood on the deck of the ship I had mixed feelings.  Happy I was on my way, not so pleased I had no camera to film the police boat that started to follow immediacy they saw the Banana trailing happily behind the Vagabond.

I began to marvel at the magnificent ship I found myself on.  The young man who had helped me so much spoke English very well; I was introduced to the captain and his wife who understood more than they could speak.  The wheel house, which had everything except a wheel, was like the something from a space science fantasy movie.  The captain’s chair ran on a long track in the floor; the console curved around the chair and the whole bank of instruments took centre stage in a room which was like an airport lounge only with a family touch.  Wide couches, tables and a large kitchen area were all surrounded with enormous windows slanting inwards to give an amazing 360° panoramic view.

The captain asked me why I was travelling with a Banana boat, I replied that I didn’t think he would have just given me a lift without it.  He agreed.

As boats and ships passed the radio frequently burst into life with voices full of questions and roars of laughter; the captain was enjoining his new found notoriety.  The Banana has certainly brought a lot of fun to the people of the river.  I was invited to visit the whole ship, including their lovely home and the immaculately clean engine room with its array of engines and motors.  The main propulsion being produced by two 12 cylinder engines each as big as a 12 seater minibus.

The police patrol ship followed for 4km, slowly closing in on the Banana.  I could see them using binoculars and I suspect they were looking for an excuse to stop us, but, the Banana would not provide a good excuse as it conforms to the NCC rules as Floating Material in Convoy.  As they turned away I regretted not having my cameras with me to record the incident.

After 6 hours of chatting; eating and drinking coffee in excellent company, the captain announced he would be pulling over to let me off at a wharf for large vessels, behind which is a marina for pleasure craft.  I said my goodbyes and gathered all the bits of the Banana, pulled it around the headland at the end of the wharf (the fast flowing current this time assisting) and waited for a police boat to come over and have a closer look; which they did.  The checked that I knew the rules and told me the Rhine was a dangerous river.  They asked me what I was doing with a Banana, I said hitch hiking and when they laughed I asked them for a life into the marina…which they agreed to.

I tied the Banana up next to a super boat, shook hands with the three water policemen waved as though saying goodbye to old friends.  The owner was very curious and thought that there had been an accident on the river and that I had been rescued.  I was invited on board and there I was able to borrow a telephone and contact the motorhome; and also sit out a hail storm that battered the boat even though it was tied up under a bridge.

I had arrived in Duisburg.  An industrial city with Europe’s largest river port.  The marina looks very nice but the reception from the owner was frostier then cold.  I secured the Banana and went up the steep stairs to find the motorhome which has been driven to the wrong harbour.  I borrowed a telephone in the office of a roofing company and, with directions sent found some meagre shelter from the icy rain near the rendezvous point and waited.

Mark, the boat owner, invited me to stay on his quay, and I spent part of the evening with him discussing the politics of the forthcoming UK referendum.  He poured me a glass of the wine from the bottle I had brought with me and announced he was a non-drinking vegetarian, who mostly used a bicycle for transport.  His sister had lived for two years at the Greenham Common women’s camp and he was living on a pleasure boat with his wife as an alternative lifestyle choice.  Our conversation did not flow easily and I had lots of notes to write up.

The small marina is like a fortress.  All gates and keypads.  Slot metres for showers and electrical supply.  The owners have an air of being unhappy and seem angry for no apparent reason.  They don’t greet anyone and their first two words to me were ‘pay money’.  Mark showed me the shower room and laundry, gave me the codes of the gates so I have had no other contact with the people here.  With the sound of thunderous ships engines throbbing in the background on the river and police sirens wailing across the city I headed for my motor home to write until the need for sleep won.  I have a feeling I don’t want to stay here longer than necessary.