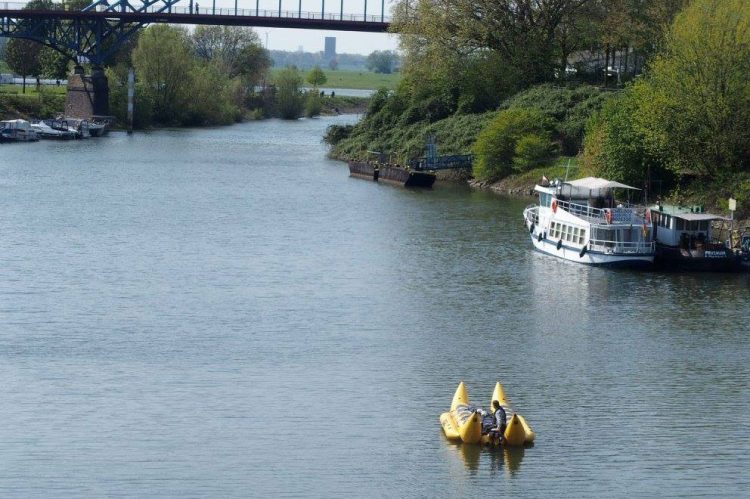 I paid for a shower and had my breakfast as the rain attempted to get through the windscreen of the motorhome.  I used the machines in the laundry and after spending all my euro coins, finally dried clothes and, having emptied the motorhome toilet I went off to find a boat to take the Banana away; and me with it.

The port is huge.  The various docks branch off from the Rhine into five main areas.  This makes ten principle dock sides, many inaccessible because they are behind various industrial activities.  Access by road is not easy and going from one side of an inlet to the other takes about 20 minutes in the motorhome.  There seems to be a preoccupation with security.

Few cafes and bars have internet, hotels ask how many minutes you want.  Arriving at various companies without appointment causes great suspicion and taking photos in many areas around the docks is forbidden allemagne viagra.  When asked why it is like this they say ‘it’s since 9/11.’

A kebab shop owner said he had internet but did not let people use it because of terrorism.  I promised not to attack his donner kebabs with my Banana but he wasn’t convinced.

I spent most of the day walking many kilometres up and down the docks, attempting to speak to ship captains.  Each time I had to explain what I was trying to do.  The many reactions ranged from disbelief to laughter, mixed with a large dose of suspicion compounded with language difficulties.  I managed to get into the harbour control office.  The woman stayed behind the solid steel gate at the top of the entry stairs for a long time before letting me in.

Eventually she agreed to telephone me when a ship was going to leave and go my direction; but she was only on duty until 2pm and I would have to come back to speak to her colleagues.  She posed for photos with me and I left.  When I returned later her replacement said he couldn’t speak any English, and said I should come back when I could speak German better.  Fair enough, but I was a bit puzzled as to why the controller of the largest inland port in Europe, which is used by international shipping, cannot speak a few words of Europe’s most used language?

I made lots of visits to ships and spent a great deal of time driving around from one side an inlet, through a maze of one way streets and dead ends that even confused my GPS.  Frequently when arriving at a terminal entrance there was nowhere to park.  The gate keepers are impossible to get past and it is impossible to get to speak to the captains.

The port is extramley busy.  I arrived at one container dock and there were 15 lanes of lorries trying to get into the dock to be unloaded.  The office workers coded their loads and assigned them to parts of the docks next to waiting ships.  The lines of lorries moved quickly; the whole operation was very impressive, but clearly stressful for all concerned.  Nobody had time to mess about with making arrangements for the passage of a hitch hiking Banana.

Another problem I have is that it is illegal to use the commercial wharfs and docks for mooring pleasure craft.  This is strickly controlled; and on seeing how things work and pure physical size of ships and materials being moved around the docks it is understandable.  I had left the Banana in the marina next to Mark’s boat.  He was amused but the project but not entirely happy to have a Banana tied up near his home, even though it was on the other side of his quay.

The marina led straight onto the Rhine with its very fast moving waters.  To get to any ship without being towed would be impossible and I could not leave the Banana where the ships are.  The timing is difficult too. If a ship is just about to leave, the crew come back, start the engine cast off and go.  If I am lucky to get someone to agree I have to be able to get the Banana to the ship within minutes, they do not want to wait half an hour.  Getting someone to tow the Banana to a ship the exact moment they are going to leave would be a stroke of luck beyond plausible chance.  I had to rethink my statagy.

After two days driving around the port and tramping along endless wharfs to ships that have no crew on board, only to see the ship sailing away an hour later when I am on the other side of the port or crossing the bridge made me turned my attentions to finding a solution to all these difficulties.

I moved the Banana across the marina to large boat captioned by Daniel and Maria.  I filmed an interview with Daniel as he had spent 60 years working on the river.  He agreed to let me leave the Banana tied up next to his boat; and I went off to seek a solution to getting the Banana to a ship about to sail at just the right moment.

I also had to find somewhere that had internet.  In the early evening I went to a Gastetter, basically a pub and was welcomed by the owner.  After an hour when a few customers came in the atmosphere changed dramatically to being quite unpleasant, and I packed up my computer and quickly left.  I cross over the suspension bridge to the suburbs on the other side of the Rhine and went into an Irish Pub called Dexters.

It was a lively Saturday night and using the computer was out of the question.  Someone recognised me, the owner bought me a drink and put a video of me from the Go Banana website and showed it on the pub video screen.  I was driving the motorhome later and could not accept the drinks offered, so I posed for lots of phone photos and some of my own before leaving as soon as I politely could.