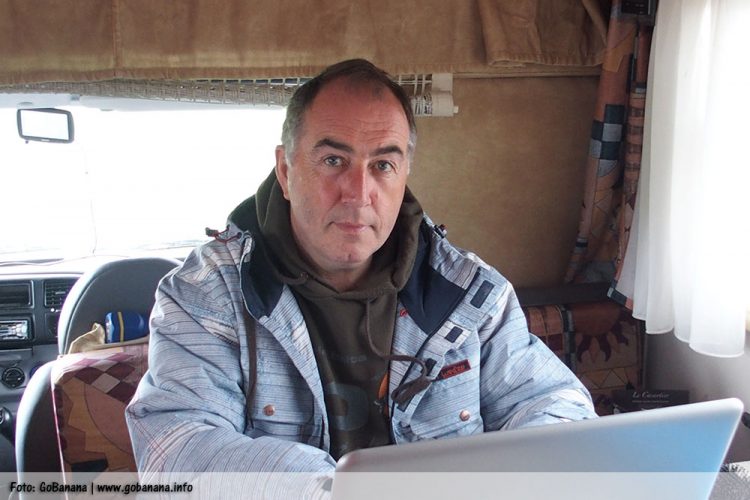 At what point do I jump in and tell you what is happening?  It seems to me that something is going on all the time, with one thing running into the next.  So I will jump in here, in a café in the small village of Doorwerth, Holland.

My plan to get to the last lock before the Rhine opens out for hundreds of Km has been achieved. The next lock after here being at Mainz, then I turn left and go up the River Main.  The relief in arriving at this lock, where the boats will have to stop to get through was very uplifting, but short lived.  The lock here is huge.  The quay side is nearly 3m above the water and the quay is about 600m long.

The Banana is tied up at the very end of the jetty out of the way of the ships.  The problem I am encountering is that the Banana is so far away from the lock that if the ships sail directly into the lock there is no chance for me to get the Banana to their boat before the lock gates shut.  I am not allowed to tie up on the jetty, and even if a ship ties up to wait if the lock is closed, climbing down on to the Banana, untying it and paddling around would also take too long. 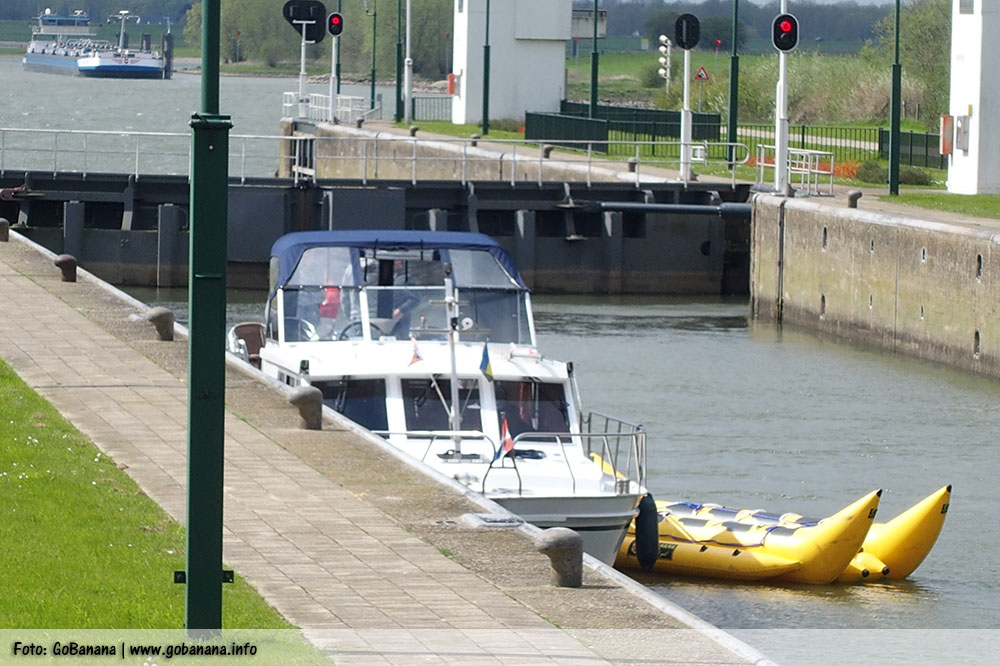 If I go through the lock the ships won’t stop once they start out of the gates.  To complicate things, the wind has come up and if I detach the Banana it will just get blown onto the bank behind the jetty.  The lock keeper (I call him Mr Angry) won’t cooperate with me at all.  He could easily tell me when a ship is coming (from 10km away) but won’t.  This lock is the last place the big ships will stop before crossing the whole of Germany.  If I move up the river on a smaller boat, I will be risking being stuck in a marina again.  Because of these problems I have only briefly visited Arnhem and will return to do some more filming later, the brief visit included spending some time in a snack bar using the internet to upload a cobbled together short video, which is now on the home page.

Waiting around on the quay yesterday (Friday 15th April) I met some firemen practicing rescue techniques in the river.  They laughed when I pointed out that most other countries’ firemen practice putting fires out, but here in Holland people falling into water, with all the canals and water lanes everywhere, is more a of problem than fires,  (the fire chief has left a note on the guestbook page).  They told me the lock keeper was a jobs-worth and loved his position of authority.  He had shouted at me from his battlements (balcony) that I absolutely had to move up to the upper part of the lock, he also said I should be wearing a life jacket whilst walking around the lock area. 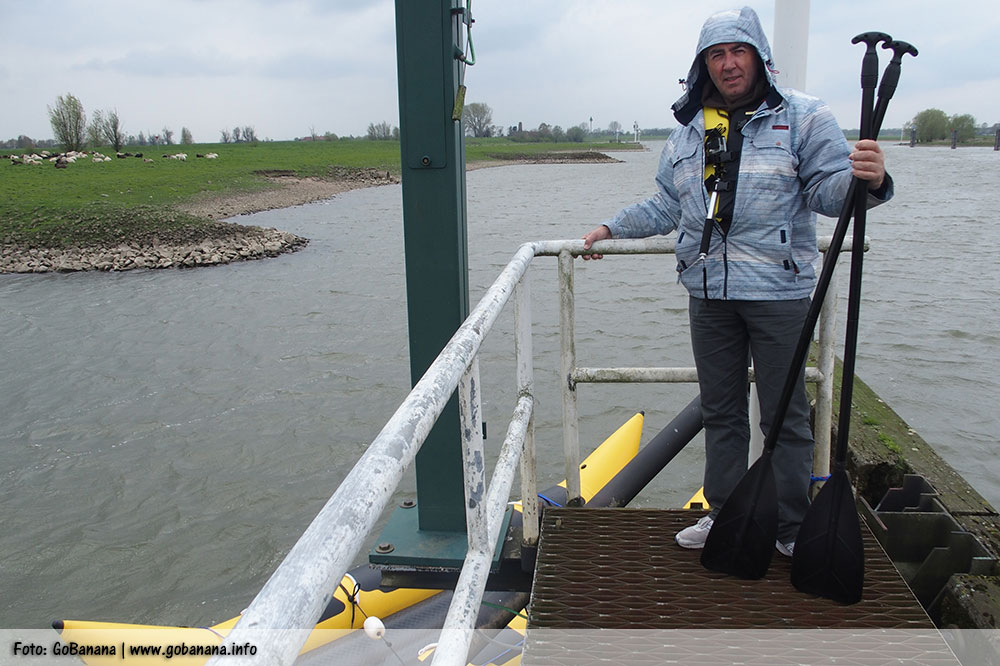 So I said I would go and buy a regulation one, and went off leaving him to shout at other people.  The Banana still hasn’t moved.  Early this morning I revised my plan of getting onto a ship.  I spoke to a woman lock keeper early this morning, who told me that no ship was going all the way up the Rhine until after 4pm, so I packed all I would need for a week into one bag, which now weighs around 45kg and went off carrying a set of oars, wearing my life jacket, naturally.  She had changed her shift by the time I went to Mr Angry’s power tower and rang the bell.  When he heard who it was he said he was too busy to talk to me.

So I said, ok, I will just go and do my own thing, bye bye.  I hung around the quay side and talked to a boat owner who said he would take me through the lock tomorrow, but only to his small marina.  To morrow being Sunday, many of the ship captains won’t move their ships for religious reasons, which hopefully will give me a chance to talk to them; and if they are willing I can move the Banana to them ready for Monday morning.  With this plan loosely in place I decided to go shopping in the nearest village.  I have bought a bottle of red wine for 1.19 euros (food also) and went into the coffee bar to use the internet.  I showed the website to the owner and he asked if I would like to come and join in with a 60’s band that will be playing in his bar at the back of the café.  So, with my cheap red wine and a party planned my Saturday night is looking good.  I will try to get it on video. 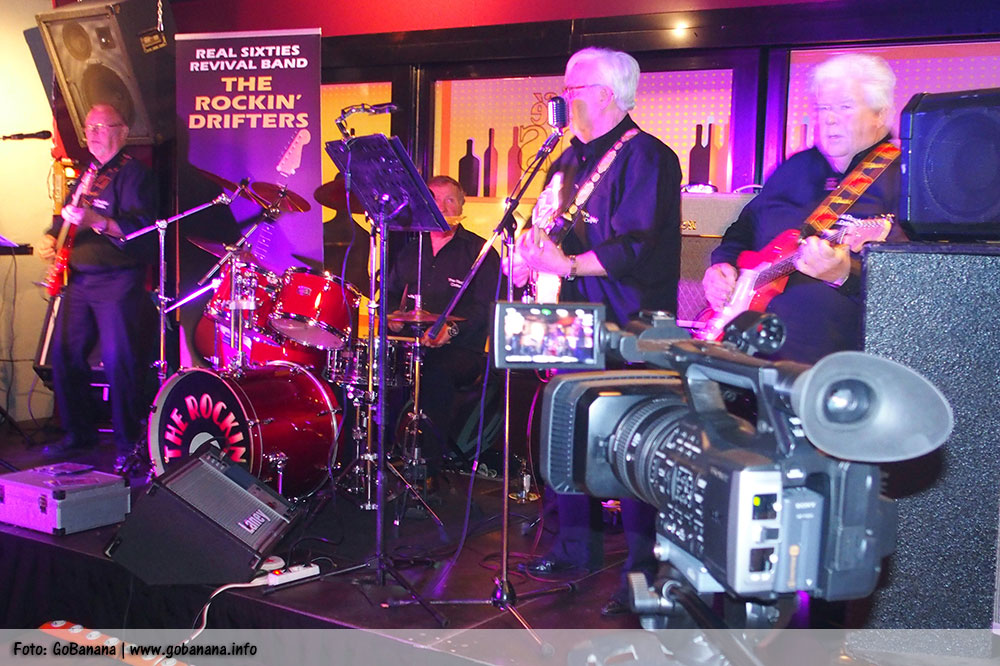 Now, do I end the blog here or wait until the party and gig are over?  It will have to be here as I am up early tomorrow and won’t have time then to bring you up to date.   If I get a ship I hope I can upload this on board as, if not it may be a week before I can get on the net.  And now: party time.

Sunday:  This morning feels as though it has started two hours too early.  The motorhome is dishevelled and so am I.  I took all the cameras and I hope I got some of the action; and there was plenty.   I parked up in the supermarket carpark eailier, and decided to spend the night there; which turned out to be a good decision, because as it turned out I was in no legal condition to drive by 1am.  The band were already playing when I entered the bar with my camera equipment.  I was introduced to them and, they had seen the website with the pictures of me playing my guitar and invited me to join them.  I have never had the opportunity to play on stage with a band so this was a new one for me; and I was unusually nervous.

Although a felt ill at ease with people who could really play their instruments, I sang almost on key and got through well enough to get a few thumbs up and a gently polite round of applause.  I did two songs and then was off to film, dance and explain to the bewildered Dutch, over a glass of beer, what the Banana was all about, as they did not understand what I said on stage. 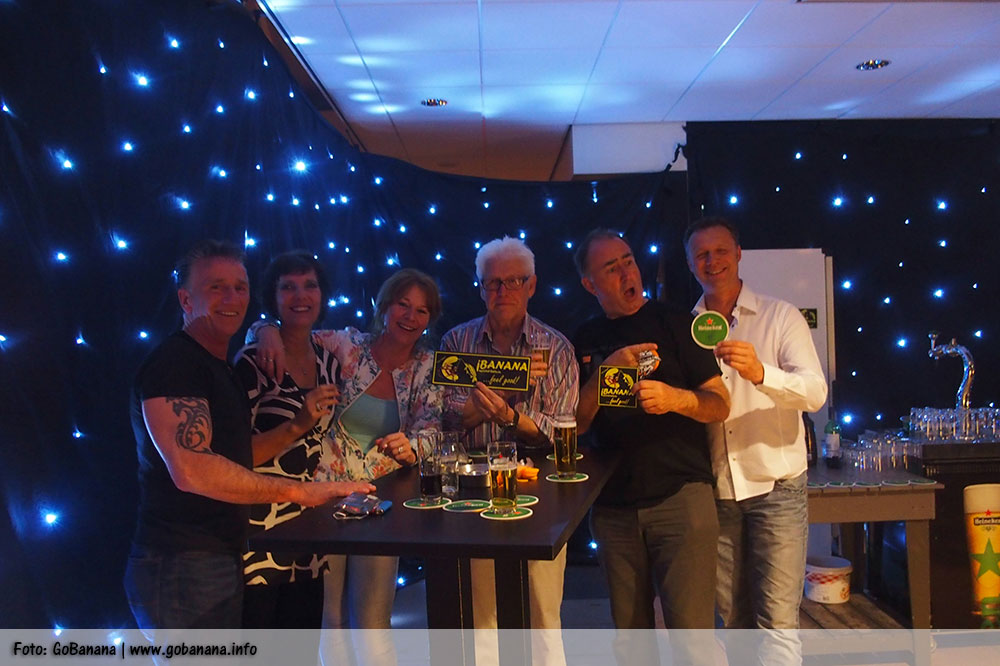 I spent the morning trying to sort out the untidy mess of the motorhome and sorting out the increasing numbers of video files and photos.  By the third coffee I was up to moving the motorhome back to the lock.  I spoke on the intercom with the lock keeper.  I had not spoken to him before and it turned out he was well informed as to what I was up to and, unlike his collegue was very willing to help.  What he told me was not good news.  Just a few boats today all going no further than 30km.  I have decided to wait till tomorrow and see what turns up.  If I can’t get a destination further away then I will take whatever comes my way just to move on from here.

Monday morning – the locks are open; the lock keeper this morning is a very helpful woman.  Good conversation with her on the lock intercom.  She has agreed to phone me when a ship is coming, so i have a few moments to get this email sent today when I am gone.  The adventure continues – I have no idea where I will be tonight