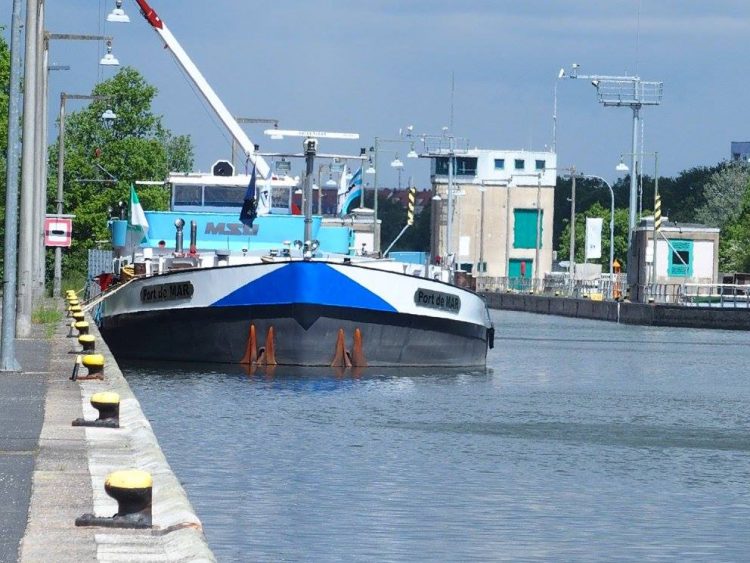 Up, showered and dressed before the first cruise ship came through the lock.  I had stood bare foot on the transformer which reminded me that all my equipment needed charging, most of it needing 240v which I now no longer had.  I went back to the town and went to the bar.  They had no internet (available for me) and suggested going to the restaurant; which I did.

Their internet was limited, so I used my tablet to send some basic messages, drank my coffee and went to the snack bar.  They were watching a Chinese soap whilst cleaning and preparing for customers that didn’t come.  I ordered chicken and chips for breakfast and set up a multi socket full of little transformers to charge my phones, razor, camera battery and all.  Conversation with then was almost impossible.

They had little German and no English or French, and my Chinese is limited to pointing at the pictures of the food on offer.  I thought it was a pity they were watching television in their own language as that is a good way to learn.  I periodically ordered ice cream and coffee to be polite and stayed until the computer was fully charged.

Surprisingly the files were not lost that I was transferring, so feeling a little happier about the world, and feeling full of ice cream and chicken I set off back to the lock to continue trying to sort the mess of video files out.  I decided to stay put for another day and seek to do something about getting the voyage moving forward east again. This would mean hanging around the lock tomorrow.  I kicked off my shoes and set to with the computer, the sun slanting into the motorhome as I worked on my badly arranged video files.  I heard water rushing out of the lock, a sound I know means a ship has come up the river and the levels were being changed to let the ship in.

I thought I would have a look at the ship so hurriedly put my shoes on.  As I got to the lock the captain, 3 meters below me, was on deck.  I called to him that I had a Banana and needed a lift.  He made a quick decision and said he would take me; and where was the Banana.

I ran back to the motorhome, threw my newly charged kit in the bag, left the computer on the table, locked it all up and sprinted best I could through the lock, over the foot bridge on top of the gates, just before they were opened and dashed along the quay to the waiting Banana.  Completely breathless I untied the Banana and coiled a rope ready to throw cowboy style to the crew member who had already positioned himself ready for the catch.

I indicated to him I was going to push the Banana into the water but shook his head; so I headed up the bank as the ship closed nearer.  As soon as it was in my range I jumped at the ship, got one food on the steel bulwark and grabbed a gard rail with my free hand whilst swinging my heavy bag over and onto the deck.

This done I climbed aboard as the ships engines revved up.  I saw the Banana waddle into the water and perfectly swung into line behind the ship as the deck hand tied it onto a bollard on the starboard side of the ship.  I was on the Honig Konig, the Honey King.

The captain welcomed me warmly, offered me mineral water and informed me of the really bad news that they do not drink coffee.  The wheel house was full of childrens toys, and I could tell they were for young children.  We went through lock after lock and I attempted to send instructions and coordinats of our destination to have the motorhome brought up river.  The river captains never really know where they will get to as their progress is difficult to predict when so many locks have to be navigated.  If they are lucky they go straight in to a waiting lock; if things go against them they could be third in line and ships coming down stream can also cause delays.

The ships just slow down if they know the lock is occupied and arrive just in time to go through, but slowing down is not what they want to do.  He had already lost three hours to this problem and was trying to make up distance by sailing longer.  His family had gone off to bed and night fell as we entered a small town and tied up for the night.  He said I could continue with him till Regensburg, which would complete the Main Danube canal.  The motorhome turned up late, roadworks had messed up the GPS coordinates and, very tired but happy, I threw myself into bed to make the best of the four hours’ sleep available.