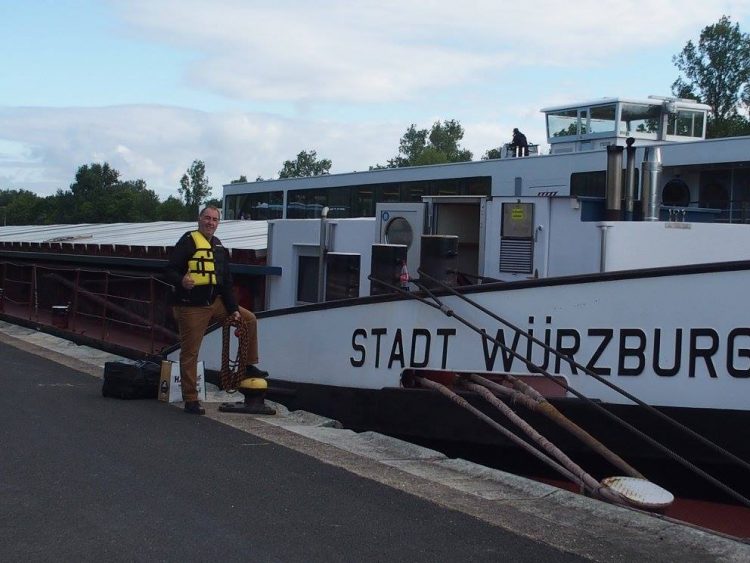 I walked to the ship in the cold, damp, dark dawn and took up my position in the wheel house.  As the sun came up a very familiar countryside of neat villages and wooded gentle hillsides was reviled.  Lock after lock took the ship higher and higher every half hour or so until Bamberg came into view.

Stadt Wurzburg was tied up in front of the Port de Mar.  No one was on board and the crane was in position to lift their car back on the ship when their trip to town was over.  The crew got ready to leave; cleaning everything for the new crew coming on board soon.

I was told the new captain would not be interested in taking the Banana with him.  Darius said he would ask him if he would so I waited on the quay as various taxi’s came and went.  I said my goodbyes and thanks to the crew; the new captain arrived, listened briefly to Darius, and without looking at me simply said no.

I took the Banana by its towing rope all along the ship to the prow and led it around onto a grassy bank at the end of the quay.  I sat down and made notes about the voyage when the motor home turned up.  After a brief tour around the town to replenish stocks I headed back to the Banana.  The town was closed for Pentecost, and I did my shopping in an open all hours’ garage.

Back to the quay side to find the ship had sailed.  I went to the end of the quay and waited.  A ship and a yacht came into view.  The captain of the ship had already said now further down the river but the yacht was close enough for me to call out to.  They steered close to the quay and said yes they would take me to the next to lock but I would have to be quick as they were trying to keep up with the ship in front.  I disentangled the Banana which took longer than they wanted to wait.

As soon as it came free I though the tow rope to them, grabbed my camera and leapt off the quay onto the Banana landing clumsily between the tubes; the yacht took off in a hurry; they had not thought to take the strain of the tow rope before accelerating, and the Banana was tugged and jerked by the rope causing the yacht to respond by changing direction.  I lay down and rolled along the Banana to position myself at the back so that the front would lift out of the water a little, to help it glide through the water with less resistance.

I could tell the drag from the Banana slowed them down, it would have been much better if I was on the yacht but that was not going to be possible, so I filmed a little of the scene from the Banana and settled down to dozing: laying with my shoulders on one Banana tube and my legs dangling over the other tube.  I am not sure if I slept, but out of the wind with my hood pulled over my face, the journey to the next lock seemed to be over very quickly.

The ship went in before us, and the swirling waters from its engines made it difficult for the yacht to hold its position.  I pulled the Banana alongside and held on to a rail and introduced myself.  I gave them a sticker with the website and explained all would come clear if they had a look.  A young boy came out of the cabin and was clearly surprised to see some bloke on a Banana hanging on the side of his boat.

The lock filled and took us to the next level of the river, and they steered to the quay hardly slowing down to let me get ashore.  I shouted my thanks and they sailed away in pursuit of the ship, so they could go through the next lock at the same time and not have to wait for the next ship, as I would have to do.  I emerged from the lock having pulled the Banana out of the water onto the quay and set off into a village called strullendort.  The town was also on holiday except for a garage, two bars and a Chinese’s fast food snack bar, which had internet.  The rest of the day was spent looking around the town, and getting over the superb meal I bought in the Chinese snack bar.

Whilst I was eating the couple were going over Bureaucracy which was clearly distressing them.  I went to the toilet, and passing by their desk I saw the woman crying at the side of her husband who was trying to make sense of some forms.  I could see a lack of stock and need of further investment in their business, which clearly was not going to happen when they paid whatever a bureaucrat wanted them to do.  Clearly their business was doomed and a hard working honest couple were likely to lose all they had.

I used their internet briefly and left to catch up on some writing in the motorhome.  I parked at the top of a ramp leading up to the lock side, some four meters above the surrounding fields, outside a gate leading to some building maintenance work going on at the lock.  The next day was also a holiday, so the site would be closed.  My 300w transformer which provides 240v from my batteries through a tantrum and then attempted to burst into flames.  Black oily smoke struggles out of the casing as I ripped it out of space under the seat.  I was only charging the computer with it so it had no right to have a fry up.  I settled down to a long evening of writing and sorting out videos.

Even though quite tired I worked till near midnight as cruise ships came into the lock at the same level as my window and the disappeared or appeared depending on the direction they were traveling.  The computer battery failed just as I was transferring video files onto hard drive.  The warning came on screen just as I started the transfer, and the battery failed at 92%.  Good night.