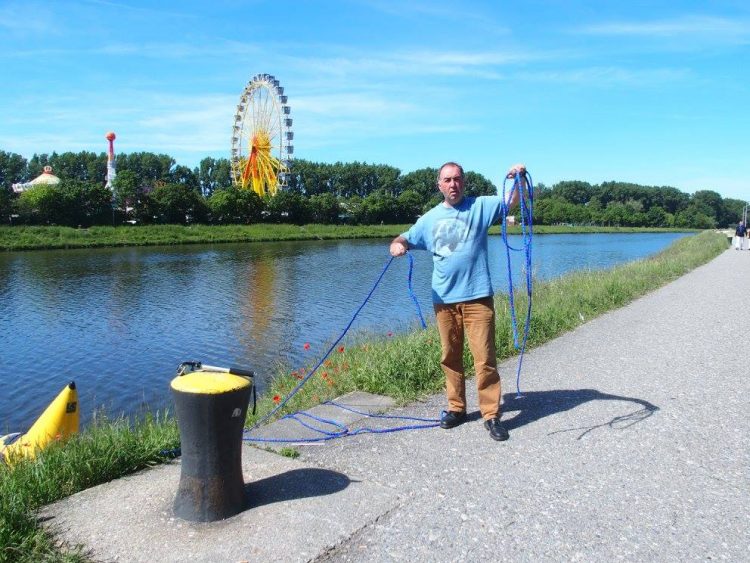 Last night I parked the motorhome legally; as near to the Banana as possible, but too far away to survey it.  This morning I found the Banana half in the water, all the ropes cut and strewn around.  Someone with a sharp knife left me a message not to shine torches in their faces whilst they are having fun banging on a motorhome.  Fortunately, my punishment was just cutting the ropes and not slashing the Banana.  This probably was due to the fact that when the ropes were cut the Banana would have slipped further into the water and became more dangerous to go near.

I made the Banana secure once again and went back to the motorhome.  As I left the quay another ship glided into the lock without slowing.  The old ship that spent two days at the quay had left; leaving behind one of its mooring ropes that had clearly come to the end of its life and its shredded remains were left hanging on the moorings.

Last night I visited the fair.  If it was any bigger it would constitute a theme park. There were the spectacular fun fair rides and stands selling everything from clothes and surgical instruments to pop-corn and chicken and chips.  The beer halls, two major ones complete with 9 piece bands, were packed with thousands of young people standing on their trestles seats, making sure not to spill the beer on the actual tables; all were cheering any incomprehensible cry from the band.  The roar of the crowd was comparable to the noise of a goal being scored in a premier league match and everyone seemed to be having a beer fuelled good time.  Walking around the mostly good natured crowds with my small camera I was approached by several people who noticed what I was doing.

They either made a fun remark, gesture or simply came up and started asking questions.  I saw a small group of young men in black T-shirts, proudly showing off their swastika tattoos.  They scurried away as some police (also wearing black and carrying a variety of weapons in excess of the green uniformed police that are usually seen) came along in a long line, pushing through the crowd like a sleek snake through grass.  There were security guards with Doberman dogs and medics standing at strategic positions, watching the few men who were looking for a fight by shoving smaller men walking along with their girlfriends or young children.  I came out of the beer hall, the quieter and less packed of the two, and saw two young men swinging another young man between them.

I filmed it, and before I could ask if it was ok the one who had been swung immediately said he didn’t want to be on television, so I cut the camera and told him he would be deleted.  He seemed put out, and said ‘why are there so many English people here in Germany?’

I replied that if he didn’t like it perhaps he should lobby the government to have all the tourist offices closed, stop the massive trade of river cruises, only allow internal flights, close the borders to all European travellers and go and get a plough and cultivate some spuds for him and his girlfriend to live on.  He changed the subject.

His girlfriend asked what I was doing and looked up the website.  The young man, Julian, now seem disappointed he would not be filmed and after a short while asked if I would film him and his friends.  I said yes, as long as you say on camera that is what you want, which he did.  I went back to the motorhome to copy the filming, on the way I stopped off to check on the Banana.  It was well tied up but showed signs that people had been jumping on it.  In the motorhome about fifteen minutes later someone started to bang on the side.

I went out and found three people around a car, trying to pretend it was not them, even though no one else was in sight.  I express my pure joy of having a visit from the locals at this time of night, when I realised it was Julian from fairground.  His two friends were getting ready to spend the night in their car and he had decided disturb his neighbour.  He apologised for banging on the motorhome and said it was not him any way, it was those people over there, who are not there now; who did it and have run away.

His girlfriend told him to stop being so stupid and get in the car before he has an accident.  They had gone before I was dressed this morning and I wondered if he had visited the Banana to leave a cowardly going away gesture.  Whoever cut the ropes did it quickly and were afraid of being seen.  It could have been anyone of the thousands who passed the Banana after the fair closed, which in a balanced view puts the population of Regensburg under suspicion.

As I re-secured the Banana some people noticed the pieces of rope and were horrified that this sort of thing could happen in their town.   One man told me he had made the same journey with a group of canoeists and had had an amazing experience, with parties each night along the route and really good times especially in the smaller towns.  He was disappointed I had so much trouble here in Regensburg and said it was mainly due to the fair, which happens twice a year, this being the smaller one.  He said the police make a lot of money with parking tickets each time the fair comes but the drunkenness causes a lot of problems for everyone.

Plan B.  Off to the lock keeper to ask for permission to put the Banana on the lock side grass, inside the lock compound.  I walked 2 km to the gate where the intercom is and tried to talk to the keeper.  He spoke no English or French, but tried his best to communicate.  I managed to ask where he was, but he just said he was not at the lock where I was.  Yes, I know, but where are you?  ‘Not at the lock’ viagra en belgique.  I said I would go to the police station, ask them to phone with a translation of what I want.

Walking back to the bridge to cross over to the town side of the lock and go to the police station I met a family on their way to the fair.  They spoke both French and English so I asked them to translate the parking sign which I found after the motorhome was taken away.   I saw that it said something about boat owners having access with cars, but no parking for everyone else.  I am not sure they should have taken the motorhome away, so I thought maybe they will help to get a place on the lock to compensate.  Worth a try.