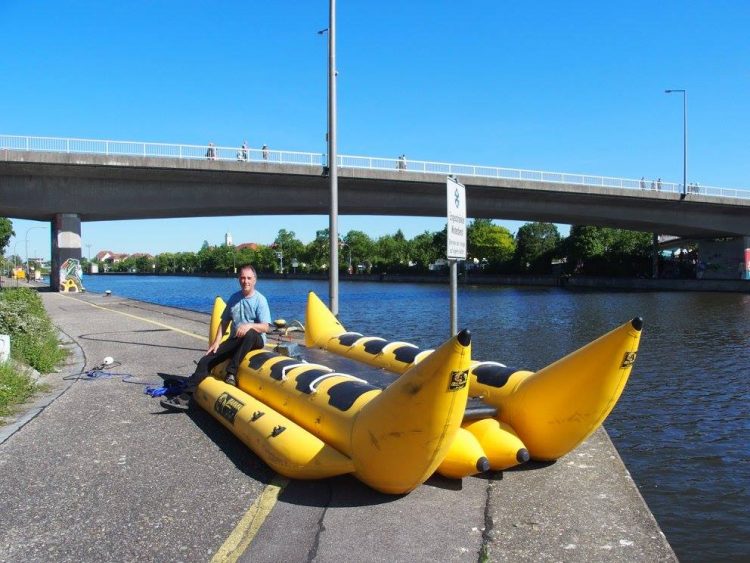 Spent most of the day on the lookout for a ship which did not come.  Maybe Monday is not a good day for shipping.  I pulled the Banana on the quay, and repaired the damage to the tow ropes.  Whoever cut the ropes had done it quickly, with a very sharp knife.  Clean cuts with no sawing, all done at the top of the bank and fortunately it did not occur to them their knife would have destroyed the Banana in seconds.

They must have known I was not far away and were probably afraid of being caught.  I braided another length of rope into the original ropes and made good the temporary repairs done in the lock.  I also attached another tow rope onto the two internal tow rings to ensure that if the original system came undone again the secondary would hold.

I had a call from the local press and arranged an interview with Gaby, the head journalist of the paper.  We had a photoshoot at the Banana; I held up the remnants of the rope and she brought the fun fair into shot behind me.  The fun fair in not so popular in the town so bad press for it I think would make popular reading.  I explained the difficulty of the lock and the lock keeper’s unhelpfulness.  Her first reaction was that it might not be a good idea to say unpleasant things about the controller.

I said that this is the truth of the situation, and why I have been here for a week. When I told her I had worse problems at Harrback, she seemed to change her mind and took all the details after that; I am not sure what she will put in the article however she was impressed by the idea of the journey and clearly got the spirit of it.

Back in the motorhome she took some pictures of the shark guitar, being that she liked the story about Eelco and the shark attack in Arnhem.

After she left I went back to the fruitless vigil, watching for a ship.  At 10.30 a huge cargo ship tied up at the quay, heading the wrong direction for me.  I retired to the motorhome as it was now pointless looking out for a ship as none would be able to dock  because this huge ship blocked the quayside.  Goodnight.