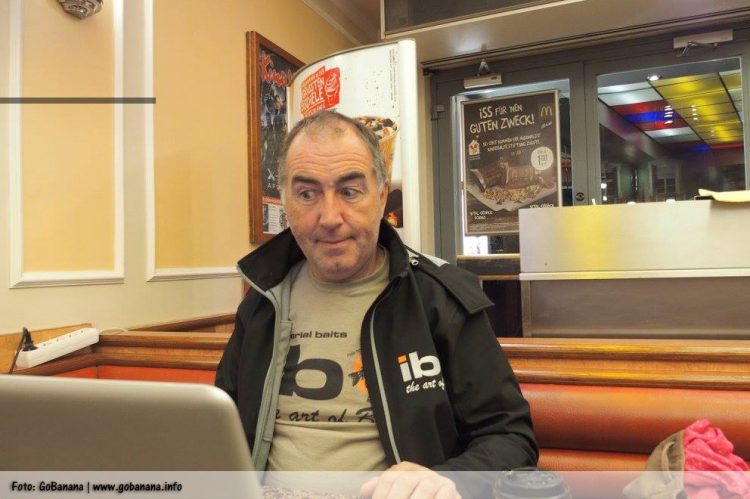 The motorhome would not start this morning, the batteries are all nearly completely depleted.  I linked the 12v outboard motor batteries to the motorhome and started the engine.  The batteries for the little electric motor are charged by a solar panned in the window of the motorhome, howeve I have been using them to run a transformer to keep the equipment charged up.  This is a power wasteful system but it works.  The problem is that the batteries are soon depleted and take a long time to be recharged.

I connected them to start the engine then left them connected to be charged in turn by the alternator.  I decided that today would be mostly used in getting the domestic arrangements sorted out.  I need gas, diesel, water, internet, toilet emptying, batteries charging and fresh drinking water.  I have no choice about the washing, I am down to my last underwear and the socks that have accumulated in a carrier bag are becoming a health hazard.

I am typing this outside a Waschsalon, a laundrette, sitting in the motorhome.  The bonnet is up and I have reconnected the batteries, the computer is connected to the transformer and there are wires all over the place.  I will need to go and sort out the rest of the domestic arrangements, and with clean underwear I will be set to conquer the mighty Danube; no problem.  Getting past the lock keeper may well be more difficult.

I have had conversations about the situation with the lock keeper’s decision.  I have explained that in his domain he has ultimate authority, after all he is in control of the lock.  But the lack of flexibility and the instant, automatic refusal to let me pass, even though I have the right, is astounding.  The reactions of people hearing the story, police, reporters, passers-by have all been similar.  Well yes it is stupid, and he is being unreasonable but he is the controller so has the right to do this so you will just have to accept that this is the way things are here in Germany.  This followed by a weak smile and a shrug of the shoulders.   The reality is these problems are not typical to Germany, every country has its officials who are officious.

Given a small amount of power sadly some people will use it whenever they can to prove they are important.  Rules have to be obeyed, but with the Banana there is no classification that exactly fits and it obliges the officials to decide how to interpret the situation.  Some unfortunately see it as an opportunity to make themselves feel important and use their power to make life difficult.   The nice thing for me is that when this happens I now have a platform to expose one or two of these ego inflated public servants who should be named and shamed.

The press lady was thinking this through and it remains to be seen as to what she will write.  The journalist at Harrback wrote the story of the difficulties there and has opened a debate about the lock keeper and his well-known obstreperous attitude.

The idea of the Banana voyage is to have fun, meet people and write and film what happens.  It is not a crusade to curs the ills of bureaucracy in Europe, but if the events of the voyage bring me into contact with difficult situations caused by officials who take pleasure in being difficult then I am more than happy to write about their silly, power mad antics.  I think I have to go and put my wash in the dryers.