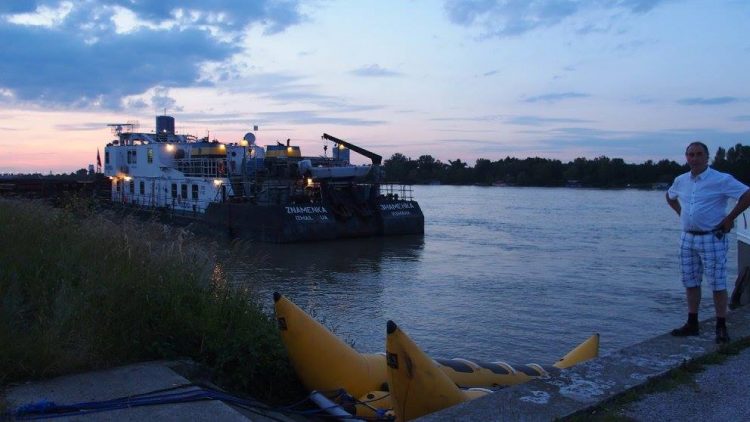 I had set my alarm for 6.45.  when it went off I felt I had only just gone off to sleep.  I found another bakery near the bridge and didn’t buy their small croissants at 1.60 each.  As I crossed over the bridge a saw a pusher tug taking two barges side by side into the lock. I drove as quickly as I could though slow-motion traffic and stopped inside the lock next to where the chief lockkeeper was standing. He greeted me as though he has expecting me to arrive exactly at that moment; he indicated that when the ship was tied up he would go and negotiate a tow.

With little optimism I prepard a small bag with some rolls and drinks and came back to the gate to find the captain had indeed agreed to take the Banana.  He wanted it to be put on the ship (or at least that was what the lockkeeper said) so instead of sliding it into the water and tying it on to a barge seven people struggled with it through the gate and hefted it onto the barge covers.  I thanked everyone and climbed aboard, went up to the wheel house and after a brief hand shake with the captain I took my place on a long seat with a blanket cover, where I would stay for the next 12 hours, toilet, food and filming breaks not included.

The Znamenka Izmail was a 37m long Ukrainian ship with no prow, just two stubby chunks of steel buffers made to push barges.  The ship was built to push ships, accommodate a large crew and carry a massive engine.  Everything was built from at least 10mm steel, window catches where 20mm steel bars similar to scaffolding clips.  The ship was equipped with a combination of the contents of a Marconi museum and laptops, modern radar and radios.

I was offered coffee, which was brought in a china cup more suited to afternoon tea with the vicar.  Conversation was difficult but possible with some patience and good humour, the captain spoke a little German and with my few words I learned about his daughter in London, his life with this company and the detailed distances of the journeys he had made on the rivers of Europe and lists of which towns he had visited.  I ate one of my rolls for breakfast, which I regretted two hours later as I was invited to lunch.

In the galley I found the tables set for the crew, but I was the only one there.  The cook, a woman with arms too long for her body, spoke one or two words of English told me to start eating the Bourshe soup which was on the table, with some bread.  I ate alone and when the soup was finished she brought a huge plate of stewed lamb with barley like grains cooked like rice.

It was all very tasty but the quantities were beyond me and I asked if I could have just half of what she served.  No problem and she came back with almost the same amount; which could not finish. One or two of the crew came in and ate some soup but they clearly did not seem comfortable with me being there so I left as soon as I could.  One of the crew had filled his plate and left to eat in his cabin; I have no idea what was going on.

I did not know if they did not want to eat with someone who could not talk to them, or there was something cultural going on.  Language I think is going to be a big problem further down the Danube.  I have been trying to learn some more German as some can speak that.  The common language is variations of Russian which I have no knowledge of at all; niet.

I returned to the wheel house and took up my position on the bench.  I went outside occasionally to film particularly nice views of the Danube, where perfect villages where framed by the surrounding wooded hills and craggy rocks whose shoulders often came right down the river bank.  In contrast there were a few huge industrial complexes set on the river where they could bring their raw materials directly into their works.  Apart from going out to film, these the hours slipped away as fast as the ship steered downstream, sometimes at 16km per hour, stopping at locks to step doan ever lower towards the sea.

Eventually Vienna came into sight, the city dominated by the UN complex on the left bank.  I thought we would sail through the town and stop at the next lock beyond; but no.  The captain swung the ship 180° mid-stream and very very slowly brought it alongside a German ship tied up at a quay.  The crew did not seem to happy about this and I had no idea what was going on.  There seemed to be a dispute, the curiosity as to why the Banana was on board helped with some amusement.

The German crew did not want to help shift the Banana and the Ukrainians happily hoisted it into the water and took it around the German ship as I followed unsure of everyone’s intentions.  I was handed the rope and pulled the Banana up onto some very convenient stairs next to a break in the quay, next to the prow of another ship tied up further down on a second wharf.  I went back and hurriedly said farewell.

Back on the quay I waited for the Znamenka Izmail to pull away into the river and continue towards its destination near the Black Sea.  It did not move for a long time, and then sailed out into the middle of the river.  I began to film its departure, but it remained stationary, engines keeping it in place against the current.  I thought it was waiting for other shipping and small boats to pass, but no.  eventually another pusher tug (I must find out the correct name for these ships) came along, slipped between it and the moored German ship.  It then came alongside and tied up against the Germans before finally sailing off with it in tow.

The Germans had been put out by the Ukrainians docking because their ship was broken down and needed to be taken away; all became clear.  The puzzle was the Znamenka Izmail remained in place and did not turn to go off.  When the tug had cleared away, the Znamenka Izmail slowly made its way back to the quay and tied up for the night.  I felt a bit awkward as I knew their original intention was to continue on their way and now they were clearly going to stay the night.  They were clearly happy to see me off their ship, and now they were tied up about 10m from where I was intending to sleep and would be going off the next morning without me, when they could easily take me along.

I waved a weak goodbye and set off along the bank towards the Hilton Hotel complex only 300m away.  I sent coordinates to have the motorhome brought to a RDV and I went into the hotel to see if I could have permission to stay in the car park as it was very close to the Banana.  The receptionist was a young girl, who loved the Banana project; I did an interview with her and she was a lot of fun.  She gave me permission to stay in the car park and issued a free pass to get through the security gate.

I used the computes in the lounge to quickly check emails etc., but the system would not let me load some photos I wanted to send.  I picked up the motorhome and put it just 30m from the Banana.  The Znamenka Izmail was tied up and the crew were settling down in their cabins for the night.  I went along to the Banana, all ok, so continued to the other ship further down on the quay.  It was called Rubbiship, which was proudly painted on the prow in English, with its name in Romanian next to the English version.  I spoke to the crew, who were having their evening meal and watching some important football program; the Hilton had put television screens all around its terrace so people could watch football stars talk about kicking balls around.  I am not a fan of football; not that I have anything against it, it’s just I would rather do than watch.

The captain said he understood what I wanted but his company would not allow me as a passenger and there were implications in crossing boarders that he did not like: he thought going into Croatia would be a problem with the customs.  He spoke almost perfect English; a great pity I would not be travelling with them.  Later in the evening I went look at the Banana, partially hidden by some grass around the steps where I had tied it, no problems although it was in the public domain.

The risk of vandalism was very much less than in Regensburg where the beer fest contributed to a lot of interference.  I met one of the crew from the Rubbish ship (actually the ship was called Rubiship), and had a long conversation with him.  He was genuinely sorry I was not going with them the next morning, but the captain had made his decision.    He went to bed early as they were leaving at 5am.

I went for a long stroll along the illuminated banks of the river.  The UN buildings flashing different colours to warn aircraft of their presence; all this reflecting on the ripples of the river.  I returned to the motorhome, passing the Hilton terrace with people sitting together, glancing at the television screens at footballers talking then turning their attention to their mobile phones.  Not much in the way of conversation going on, I decided not to invest in a 10-euro glass of wine and continued on to my waiting Spatelaser German slightly sparkling white wine, which I rather like.  I sat feeding the mosquitos on a bench near the Banana and sipped my wine.  The Bugs won and I went off to do some writing in the motorhome.  Later I watched Avitar, washed down with another glass of German white wine. Bed.