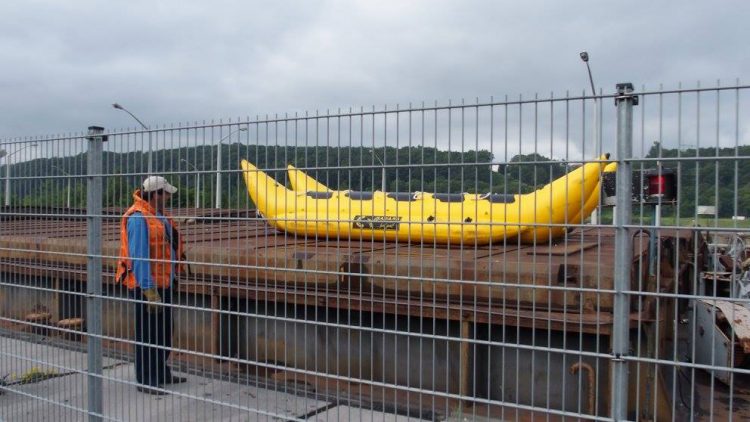 A black bird sang its song beautifully on the motorhome roof at 5am; very loud.  A bang on the ceiling sent it away and I got up two hours later, without the lovely, but deafening melody.

I was surprised to see the Ukrainian ship was still tied up at the quay.  Two of the crew set off for the town with backpacks and gave me a wave as they passed.  The ‘Rubbish’ had left, and no ship had come to take its place.  The Banana is in a good place, but not perfect.  There is a marina fenced in on the right of the footpath on the quay; a gate further along gives access to the boats, and at the back of the marina is a well illuminated car pack resplendent with its parking payment machines.

The Hilton carpark extends all along the waterfront just behind its footpath, and goes right along to very close to where The Banana is tied up between two wharfs, on a sloping piece of grass with some steps leading down between the quaysides.  I am now deciding what to do next.  Experience has taught me that there will not be a great many ships stopping here, and I will have to wait until one does.

The timing has to be right as a ship may only stop long enough to take on crew or for the crew to go shopping.  Until I get to speak to the captain I just have to wait: which means it is tricky to go away from the quay as I might miss the only suitable ship for days, or as in the case of Duisburg, nearly two weeks.

I have supplies for four days in the motorhome, and if all else fails the Hilton does a drawn pork roll and chips for 16 euros, so I won’t starve.  The down side is that the chances of going out and meeting the people of the city are limited to the wharf, or, I could choose to abandon the Banana and just go off and explore.

I decided to make sort trips along the wharf, returning occasionally to see if a ship had turned up.  I spoke to a few people and visited the Hilton; again no real chance of meeting people who were intimately involved in themselves, enjoying being in the company of friends or colleagues.   I went walkabout and explored the suburbs of the south of the city and found a shopping centre near a suburban railway station.

As I walked around the centre I felt as though I could well have been in Romford, Rotterdam or Poitiers; only Poitiers has less signs in English.  I bought some essentials and returned to the motorhome.  Right next to it, tied up to the quay was a German ship.  He had tied up across the space between the two Quays and boxed in the Banana.  I spoke to the captain later min the evening whilst he was on deck.

His English abilities were quite good but in the end he decided he didn’t like the risk of crossing the border with an alien and a Banana attached to his ship attracting attention from the border patrols.   This was a close call, and when he said no, I was disappointed as he was sailing to Bratislava next morning at 6am.

Another long walk along the bank of the Danube and then bed.