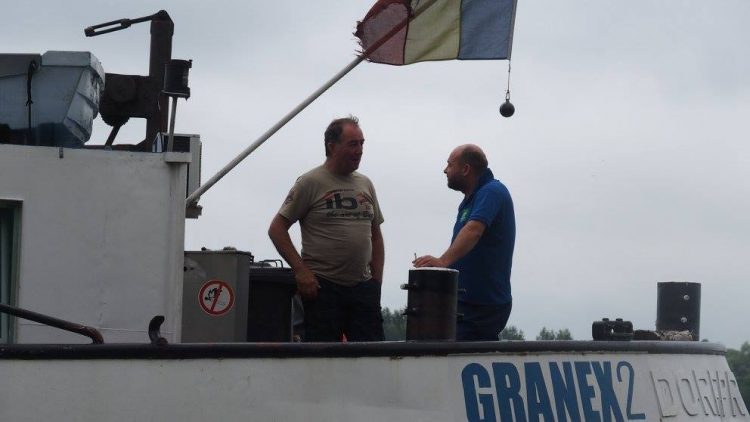 Waking up to itchy ears, burning patches on feet that had been exposed during the night and the sound of a sit on mower running over gravel hit me all at once, the moment I opened my eyes.  I needed coffee, and something to wipe off the blood splats (my blood) left by me swatting mosquitoes around the inside of the motorhome.

I looked out side to see the German ship had gone, the Granex 2 still in place and one of the workers wizzing around on his sit on mower, now actually cutting grass.

After breakfast I set myself the task of writing this blog, Daniel turned up on his bicycle and we sat in the shade.  It was a very useful conversation as he explained some of the mysteries I had observed on my voyage as how some parts of the shipping industry actually worked.  I would have liked to have filmed this but, I think he would not have given me the information I now have had it been recorded.  He confirmed some of what I had seen and many aspects of the industry I had not.

I took him to the shops and bought a few reserves of the basics; bread, milk and some fresh fruit and easy to cook food.

Back at the wharf Daniels ships were being loaded with ground maize.  The turmeric yellow powder had turned his ships canary yellow and there was a cloud of dust drifting 20m into the air, away over the Danube.  I filmed as lorry after lorry came and tipped its yellow dust into a grill hopper which fed a belt which carried it away to be spilled all over the ship with most going into the hold.  I cannot Imagine this being possible in the rain.

Having dropped off the shopping, I went back into the town to send these blogs off and have a stroll around.  There are no ships on the quay that are going towards the Black Sea other than the Granex 2.  Daniel has not offered to take me on board again, I am not sure why; it may be language difficulties are the problem, or, it may be he does not want to attract attention from the water police or anyone else as he crosses over the border into non-European Croatia, which has the reputation for having difficult officials.