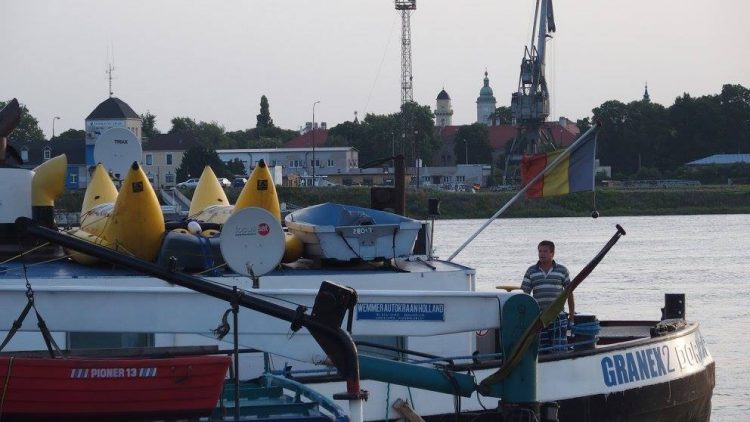 I left the quay early and went back to the old one.  The Granex 2 had been moved from one jetty to the next one; a ship which had been anchored upstream had changed places with the Granex and was being loaded.  I had a brief chat with Lucian who asked me how far the town was and if there was a Tesco as he needed some supplies and cigarettes.  I offered to take him, and he said he would let me know when he was ready.

I went to speak with the captain of the other ship who told me he was going to Vienna and then Regensburg.  This was not true, the night watchmen had asked the dock boss for me who was going where.  I politely said thank you for the very kind offer of the life but I was going the other way.  I can never understand why people cannot just tell the truth.  ‘I don’t want to take you with me, so I won’t’ is much better than lies, the result is the same only one does not deserve respect.

Daniel turned up and we chatted for a long time; eventually I asked him to do an interview, and when Victor turned up too he also agreed.  Daniel made a phone call to his girlfriend, spoke loudly and stayed close to the camera.  I took them back to their ship to save them the walk, and waited for Lucien and Florin to come to be taken to Tesco.  The came at 6pm, and found the they could not get their cigarettes in the superstore.  When they came out I asked a man in a car with a young boy who was clearly waiting for his wife if he knew anywhere that was open.  He realised we had language problems so he indicated for Daniel to follow him.

They came back half an hour later and he told me to follow his car as he knew somewhere else that would be open.  His wife had come back in the meantime and off we went.  He literally went out of his way to help out and I was amazed by his kindness.  On the way, in the motorhome, Daniel turned to me with a frown on his face, pointed at the car leading us and said ‘They are gypsies’, ‘Oh’ I said, ‘ I thought they were people; in fact, very kind people too’.

I took them back to the quay, made a meal and noted a large pusher barge slowing in the river.  A Ukrainian ship with four barges made its 180° turn and dropped anchor 300m from the jetty where the German ship was being loaded.

I sat outside in the evening with my guitar, the moon rose in the south east and woke up every mosquito in the northern hemisphere.  I went inside and put on protective clothing; long sleeved buttoned up T shirt, long trousers tucked into my socks and fly spray on the sleeves.  It was not possible to play for more than a few seconds as the mosquitoes landed on my ears, hands, eyelids and found my bald patch; the temperature during the day had reached 28°c in the shade and the mosquitos were thirsty.

It was still hot, and the motorhome hotter inside so, I abandoned the guitar for a fly swatter and took my revenge.   The moon rose higher and the night air cooled, the mosquitoes, now finding it difficult to fly with so much blood in them mostly went off to bed, leaving just enough of their clan to make being outside unpleasant, I sprayed the inside of the motorhome and waited outside with a beer until it was safe to breath inside again.

I made some supper and was under the covers quickly, to protect myself from the surviving mosquitos who, being tough enough to live through a gas attack were a dangerous bunch.  My new clean sheets were just the job I thought and I had a comfortable night, without hearing the whining of the devil’s beasts, who wanted revenge for their lost relatives.