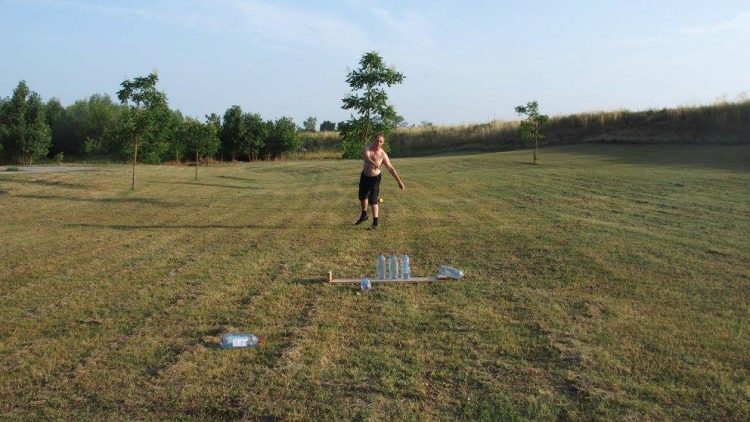 5.30 am the sun is up, the sky is blue, its 22.5°c in the shade and the batteries are running down for keeping the computer going.

Ablutions done.  Breakfast done, well done actually fried egg rolls, real HP brown sauce made in Holland, and several cups of coffee.  The internet was on, so I got out all the cards from people who want to keep in contact with me and copied their email address into my contact list; a job that took a great deal of time.

Once finished I typed a brief message to all of them and successfully sent it off.  I haven’t mentioned the dozens of times the connexion was cut and the data I had loaded lost.  My philosophy towards machines that don’t work is that they take up too much of the cosmos and should be returned to atomic particles.

The temptation to thump the computer was only just resisted by telling myself it wasn’t the dumb beasts fault, but the server which was out of destructions range.

That done I went off in search of a Chinese meal for 2.50 euros, and for that a huge choice and more than I could eat.  Before I left I looked in on the Granex 2; Lucian, the captain, was apparently sleeping and Florin indicated he had no idea what was going on.

Now, if I was scaling some unknown mountain on the south pole I would be able to write some exciting stuff about endurance, fortitude and determination against all odd and elements, by writing: I stayed at camp three until the polar storm abated enough to break the ice of my cornflakes and… however, I am in a nice place in a nice climate with more or less all I need (except a ship) and the worst thing I have to deal with is the local aggressive tribe of mosquitoes.

Not the makings of an exciting read.  So all that said I went back to the motorhome to try to motivate myself into to either coming up with an escape plan, write an amazing blog or do the dishes.  I did none of them.  I decided to do some hand to eye coordination exercises out of a child like impulse.  I got the platform that I use to hold the little outboard motor and put it on the grass, got together all the empty drinking water bottles, found my juggling balls and set the bottles up as skittles in a line on the board.  The workers along the wharf looked over at what I was doing and lost interest just a little faster than I did with the game.

I took a few photos of me throwing the balls at bottles, put the lot away and went back to the computer to be a good boy again, occasionally going outside to look at the beautiful, empty of ships Danube, lack of movement on the Granex 2 and nod at the watchman before returning to camp thee to hack ice off the guy ropes to… ok, ok, make another coffee.  Whilst usefully waiting for my coffee to cool enough to drink, I heard a very familular sound.

There is an engine powering many older ships (12 cylinder diesel with woppleganger-gadity-thingy-ma-gigs and all the tech stuff from the fifties), including a nifty compressed air system for starting the engine that made sure I had no living daylights to bother me anymore the first time I heard one start up.  It sounded like the noise I would imagine an exploding Banana would make if a tank drove over it, which is exactly what I thought it was the first time I heard an engine of this type fire up.  All that to say the crew had detached the Granex 2, fired up the engine and steered out into the Danube to turn 180° and head off towards the Black Sea; the way I wanted to go.

This was my equivalent of failing to hack the ice off the tent and getting buried at camp three.  I was disappointed but more over a little concerned.  I have watched other ships sail away having refused to take me and understood why.  I could list the reasons starting from they are ‘not allowed to take passengers’ to ‘I hate free loading Englishmen’ or ‘we are turning right at the next island’ (that works for ford fiestas and 1,800 ton ships alike).  This time I had no idea why I was not invited; which means I don’t know what to change next time I ask for a lift.  If I understood the reason I could remedy the problem.

If they sneaked off because they didn’t want to have me clinging onto their sloping office chair anymore I could have happily offered to sit on the Banana the whole trip.  Don’t know, never will.  Let it go, along with the ship.  I went to the wharf side to wave my thanks at the wheel house, I could not see through the windows which were reflecting the shiny surface of the Danube, and for all I know they had no idea I was there at all.  My cheery waving over I went back to the motorhome to look for a tape measure.  Desperate times need desperate measures.

There was an aluminium boat sitting upturned in the grounds near the weigh bridge.  The grass around it, small shrubs and grown over mole mountains indicated the boat had not been used very much for a few years.  I had looked at it once or twice from a distance so I thought I would go and measure it.  Knowing its length I would be able to find out roughly its value, and, if all else fails I could rethink the voyage parameters, perhaps buy the boat and tow the Banana myself.  Absolutely not what I want to do at all, but I would at least be moving in the right direction even if all the reasons why I did not do this in the first place still exist.

Disappointment and a gentle feeling that I should do something is not a good mix for decision making.  The boss of the complex turned up with his wife and child, dressed for a visit to a restaurant carrying a 10 litre plastic can full of petrol.  He produced a bottle of beer, ice cold, and gave it too me.  When I saw them coming I went a got some Haribo sweets from the motorhome for their daughter so the exchange of gifts went well.

I asked if the boat was for sale and he said no, but it could be. He would think about it on the way to the restaurant which had a swimming pool and beach; just 2km down river.  The family headed off for their tiny boat with an outboard, warning their daughter that she could not eat all her sweets before their forthcoming meal.

I could not find my tape measure and guessed the boat was 4m long.  With a quick look at the internet I discovered a newish one with outboard would cost around 5,000 USD $, which I don’t have.  Also, the physical limitations of transporting 5,000$ in local cash would in itself be a logistical problem.  So I put the idea on the back burner and went back to looking at the empty expanses of the Danube.  Later I moved the thousands of items that I had brought with me ‘just in case’ , which are stored in the shower cubicle, along with my clothes and repair equipment for the Banana.  Piled them all up on the table and had a shower.

The cubicle is cramped, but just adequate and the water was hot and very refreshing, well worth the work of moving all the stuff.  I dried myself, dressed and felt fresh and refreshed.  By the time I had put all the stuff back, which was sweaty work, I needed a shower again.