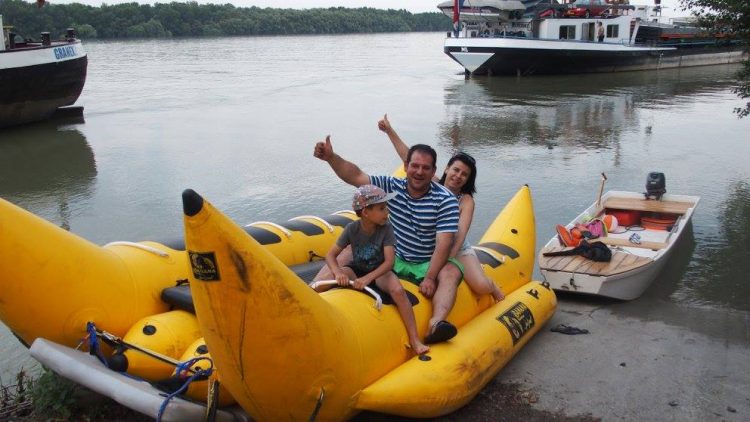 I got up early, cleaned the blood streaks off the ceiling over the bed where I had murdered several of the blood sucking beasts that had managed to get past all the defences I had set up.  During the night I had been woken several times by mosquitoes whining in my ear to let me know they had injected me with liquid itching powder and sampled my haemoglobin.  My battle plan was to have my powerful torch to hand and dazzle the nocturnal marauders to make them land; then splat, smear, sleep, flat battery: whiiiiiiiiiiinnnnnnnneeeeeeeee; torch, no light, bite.  Dam.

I scratched whilst eating my Weetabix, (the new version with honey, which tastes like postage stamp glue).  Went outside with a coffee and my selfie camera to film a note basically saying I was six days in to getting nowhere, now without a ship and was planning desperate escape routes.  Having explained this to myself on camera I went to the wharf to look upstream at the new wharf to see if anything was likely to happen there today.  To my surprise there was a huge pusher tug with enormous barges tied up and being charged with a load of grain.  Battle plan well-rehearsed, I drove the 2km around to the new wharf, waved a familiar wave at the other gate guard who had never bothered to stop me, and drove into the dust storm on the quay.  I left foot prints in the dust similar to those left on the moon by the Apollo astronauts and clambered down to the pontoon with the barge tied up to it.

The side of the barge was head high as it was not yet loaded and I scrambled as seaman like as possible onto its bulwark ship thingy that goes all around the boat.  I said good morning in my best German to several crew members who didn’t question me being there, probably because they spoke only Russian and Bulgarian.  I found the captain who was intrigued and surprisingly helpful; he was sorry but he made the journey to Bratislava and back and rarely went anywhere else; however, there was another ship coming tomorrow, going my way and he knew the captain.

He would give him a call on my behalf and there was a 20% chance or so that he would let me go with him. With this vague arrangement, as far as I am concerned being a done deal, I went back to the motorhome to get my stuff ready to do some filming in town, attacking the tourist board first.

In the end I did not get as far as the tourist office, but went into the local library instead, as it was nearer.  Good move. I was met in the entrance by a young woman who immediately directed me to her colleague who could speak English; a smiling man approached and asked what he could do to help.  I explained I wanted the tourist board to see if they would be interested in sorting out someone who could speak English well enough so that I could promote the town by showing how friendly the locals were.

He took this on board, embraced it and started to organise my day, only stopping to touch base with his boss. He provided space in the upper part of the library with power points and seating so I could do some interviews.  I went off to get equipment and anything that needed charging.  On my return there was a group of three young women standing by the door, with my hands full I nodded my intention to navigate the spring loaded doors and the younger of the three immediately went and opened the door.  It turned out she was the library boss.

I was brought coffee, a glass and carton of cool orange juice.  They told me I could close the windows that were keeping the upper room breathable and use anything I wanted to get my project under way.  I set to getting my computer and hard drives set up so I could transfer the latest videos off the computer and free up the memory to receive and work with the next batch of filming.  I never had the chance to actually get any of that done as it was announced that Gyula (the nearest I could get to saying his name was Jules) had come back with the good news that the visitor centre in the nuclear Power Station just 5km away was willing for me to film inside the centre.  He had called some wine producers in the town and had arranged a visit to one of the newer ones.

I interviewed Gyula and some of the staff, then packed up all and got ready to go to the Power Station.  Gyula announced his boss wanted to do a history of the town on camera, in German and I could put subtitles on afterwards.  I explained, with the example of a TV news bulletin, which in a few minutes all the important stories from around the world are told, that I could not do a history of all the towns in Europe that I visit, and we settled on an in depth thumbs up ‘Go Banana’ with most of the staff gathered to do it, which was the best I could offer.

Gyula, now grinning more than ever, and I went off in the motor home to the Power Station.  The display promoting nuclear power was very good but I was more interested in the story about Jules’s family who had worked at the station which was why they had come to the town in the first place.  next was a trip to a winery, set under the town in a cellar only built seven years ago, with a restaurant above; it was on the same space where the rock band had performed.

When we arrived a man Gyula had tried to reach unsuccessfully came out of an old building and greeted him.  We were taken into a large garage sized building with a trap door leaving to a long, narrow barrel filled cellar which looked more like an escape tunnel with alcoves.  We tasted wine, filmed, listened to the entire story of his family from the middle ages until the present with translations from Gyula and illustrated with carvings on barrel lids.  We left and filmed the dismantling of the rock stage and booths.  Then went on quickly to the restaurant with its wine cellar below.  It was astounding, beautiful and full of religious artefacts all punctuated with stories about its construction and things they had found in the ground including a hidden passage to avoid the taxes of communist years.

They gave us a bottle of wine and Gyula and I headed off to find the vineyard.  At the top of a mosquito guarded lane, the fields of vines were baking in the sun; which was at the wrong angle to film, so we had to walk almost another kilometre to get around the dazzling rays.

Bitten and sweaty, we made our way back through the mosquitoes who took advantage of us not having free hands to swat the mercyless bugs.  Back in the motorhome we decided we had enough energy to visit a roman ruin (at the top of a hill, of course) and, during the visit I learned that Gyula had been involved in the excavation and was part of the team that discovered the grave of a roman soldier on the site.  Coffee in the lovely but empty restaurant below the ruin was essential, before driving back to the library and saying our goodbyes, which were quite emotional for two men who had only met that day.

Back on the high street I bumped into a woman a had met a few days before.  She had given, or tried to give me directions.  She and her daughter introduced me to her friends who were 30-year-old twins.  The women were very flirty with me so I filmed the fun.  I needed liquids and food so set off back to the port; to look at the situation there, and document my day in various ways.  The internet connection was not working so I concentrated on computer stuff and blog writing until my transformer drained the battery which is charged by my solar panel.  The computer battery failed and I gave up for the night; frustrated that I had not sorted the days filming out due to not wanting to risk battery failure during the long file transfers.

I went on a killing spree with all the weapons I have, fly sprays, swatters and wet towels.  I killed hundreds of the biting bugs and took out quite a few fairly innocent ones along the way.  I went to bed in the sure knowledge that the survivors would take a blood-thirsty revenge the moment I closed my eyes.  I was wrong.  They started biting straight away.