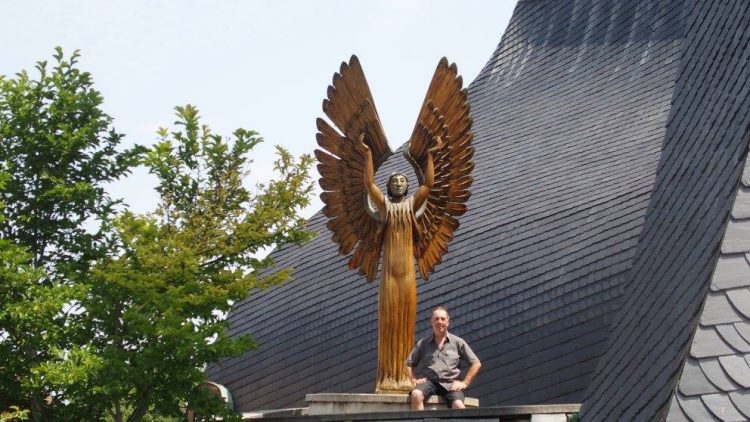 The week-end is upon me, and for me this is not good news.  The port will function to fill the ships that are here, but nothing else is planned, and there will be no more ships until Monday.  All is well, no panic and no stress, ships are coming and just because the ones that have been here are all going towards the West (physically North on this stretch of the river) towards Budapest and those who could have taken me East wouldn’t for a variety of reasons I don’t understand.  Like I said, no stress.

I decided to use the day to chill just a little, read a little and do some basic stuff like shopping, clean things and catch up on internet messages and write notes.

This all went well until around 3pm.  The day was hot and humid the result was that the sweat running down my arms was in danger of short circuiting the laptop as I typed.  There was a nagging thought running through my day that although it is ok to chill a little sometimes, I am actually on a voyage which has gone nowhere for eight days.  My visit to the town produced nothing more exciting that a few photos of me standing in front of Tesco to make the point that Europe is becoming all the same as far as shopping centres are concerned.

I would have liked to talk to someone on camera about what they thought about this but Saturday morning shoppers who only speak Hungarian, who didin’t see the point of saying anything to a bloke who had a Banana floating in the Danube 3km away.  So there was nothing of interest I could film.  By 3pm the feeling of sitting calmly watching the Danube go by whilst I should be moving with it rose to the surface and I put away the lap top to do something about the situation.  I needed some positive action.

About 2km down stream I had seen a small quay, just visible beyond the overhanging trees that hide the tiver banks.  I had seen on several occasions groups of young people paddling canoes and kayaks, venturing against the current as far as the town.  I decided to investigate so drove the motorhome up over the dyke and followed a tarmac trail that led directly to group of buildings surrounded by a large collection of canoes of all sizes.  The gated property was open but there was no sight of anyone.

I parked up and went to the top of the dyke where I had a view of the river, an odd statue with flowers placed underneath it like a grave and below a small jetty with a couple lying together in the sun.  I went back to the motor home and got my selfie camera and went for an explore around the ground.  I could hear voices of young people coming from an upstairs window.

I was interested in anything that could float, anything to do with boats and anyone who knew about them.  I was formulating my escape from Paks, and needed local information, ideas and help.  There was a workshop, some broken canoes and one or two apparently abandoned small motorboats.  I have seen bigger boats on municipal park boating lakes.  I was not sure what I was looking for, I was just absorbing what there was to see if I could come up with a plan.

I went back to the main building; found an entrance door and went in.  There was a large gym sized room to my left and stairs to my right; leading to the voices.  The whole place had a feel of a youth hostel or summer camp.  Along a corridor, I found a sort of common room with assorted chairs with assorted young people on them, mostly fiddling with their phones.  There was a level of competence of spoken English which was encouraging.  There was also an openness to me being there which was more than surprising.   A staff member walked past, nodded a hello, and went off outside onto a veranda.   The young people crowded around to practice their English.  When I showed them pictures of the Banana on my tablet there was an instant bond between us; a common interest in things that float.  I had all kinds of unpronounceable names given to me, with no time to write them down.  The lad with the best language skills seemed to have become a spokesperson for the group.  He had noticed in the photos on the tablet that I had a guitar.  He had not brought his with him, so I suggested I could set mine up with a speaker and let him have a go.

I moved the motorhome into the grounds and parked.  I will call the lad Paul, for ease of typing here.  Paul didn’t like the sun and was too hot, but, he was very enthusiastic about the guitar thing.  I opened the sun shade on the motorhome, and got the music paraphernalia out, which the others boys immediately started to set up as if they were roadies at a rock concert.  I set up cameras to record the proceedings and set the selfie running.  They eventually organised themselves into a band, chose a song and sang it whilst I filmed.  All the time I kept thinking that if I had attempted to do this in the UK I would have been arrested by now.

I went off to find a responsible person, the man who had given me the nod upstairs seemed to be in control.  He spoke some French and seemed to be very pleased I had turned up to film the summer camp and its young people.  He insisted I joined them for their evening meal; I had indulged in a huge plate of sweet and sour fish balls and rice a few hours earlier and was still full, butt was out of the question to refuse.   I checked again if it really was ok to film everyone and he assured me it was, no problem, welcome.  I had not told him what I was doing, nor had I given any identification papers or any real reason for being there; it was just not a problem.

Paul told me his real hobby with karate, he and his friend were in the same club.  I asked them to do a demonstration and show me some moves.  The camera was already set up so, in full sunlight Paul and his friend happily danced around whacking each other and encouraged me to have a go too.  What a laugh, sweaty, but funny.

The call to dinner came and all headed into the gym where trestle table awaited.  I was served from a huge aluminium pot which was on the floor, the line of young people who served themselves using a ladle and scooping the sausage stew into their soup bowls stood back and let Paul jump the queue to serve the unexpected guest with the selfie stick.  I was asked by the librarian boss what I thought of Hungarian food.  She agreed with my honest answer that it was really tasty, but better eaten in the winter when you needed substantial hot filling stews, summertime it was a bit heavy going; I didn’t mention my preference for the Chinese fast food restaurant on the high street.

The young people had not long arrived at the centre on their bicycles so the giant pot was visited several times by most of them.  Paul approached me and said they were going to be having a group meeting and looked embarrassed, he searched for words that were polite enough to tell me to leave and failed.  I said I was sorry that I would not be able to stay any longer and actually needed to get away asap.  He was visibly relieved at not have to ask me to go; I went off immediately to the motorhome and got the Haribo sweets that I had been given, I checked they had not melted and went back to hand them out.  This all done in a few moments, I shook hands with the leader who seemed delighted I had turned up and was genuinely sorry I was leaving.  I drove away feeling confused.  The hospitality I had received, as in the library and the vineyards not to mention the dock personnel was frankly astounding.  It was beyond hospitality or welcome.  I was received as a person; a whole person with no need to explain my existence.  I was there, which was ok, no problem.  Naturaly, not everyone here has shown this attitude; but the greater majority have.  I have not stayed in the cities of Hungary, the ships I travelled with went straight through.  I am not disappointed at this as over many years of traveling I have never really found cities to be pleasant places to live; I wonder if the welcome I have had here would have been the same in Budapest?

Back to my private holiday camp, with free internet and now electricity supply, access to water for the motorhome, showers available at the new dock and transport for the Banana between the two docks provided by the boss with his speed boat; the grass freshly cut for me and security cameras watching the Banana in my absence. With all these facilities I should have been content.  But I was not.  I have a serious feeling of not wanting to overstay my welcome, and further; I need to get on with my journey which, with only a few ships per week, and the refusal to take me by the ones who could have has left me with a very uneasy feeling.

The results of the referendum in the UK has caused some confusion in the minds of the people here.  Even I am not sure what my status is, although some friends have sent me messages saying that nothing much is going to happen for a couple of years whilst Europe sort it all out.  There clearly was nervousness amongst the captains who have enough problems with rules and regulations as it is without adding to them by me being on board in uninformed and confusing circumstances.

I spent my Saturday night thinking through my situation, helped by a glass of wine.  The watchman came over to have a beer with me and we grunted bad German at each other, said how hot it had been today and no, there were no ships going to the general direction of the Black Sea.  After he went I did some searches on the internet to inform myself about boats, floating things and what was going on in the political world following the UK divorce.

I am a universalist and would prefer no borders, one language and one worldwide currency.  I would also like a world where there was no need for armies.  Moreover, in my perfect world there would be office workers but no bureaucrats.  The breaking away from Europe by the UK has disappointed me, but I am an optimistic realist too and I think, although there will be change, nothing much will change.  My internet searches had also provided me with information about the cost of second hand outboard motors.  Good night.