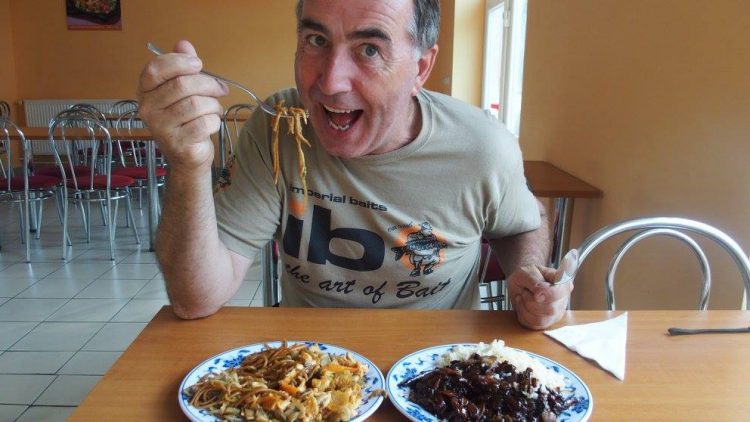 I had parked the motorhome at the old quay, in a field I now think they mowed for me to be out of the way of the big lorries that bring the corn.  I drove to the new quay where a barge without ship was being loaded under a cloud of dust. Crew members leaning on rails smoking and getting covered in the flour like dust; reminding me of Apply’s Flour mill in Bootle, next to the canal where I used to play as a boy, near Liverpool.

I was finishing breakfast when the boss of the whole complex turned up and said he wanted to have a chat about the Banana voyage and if I needed anything.  I said I needed to get the Banana 2km to the new dock where most of the ships are and maybe go with the barge pusher when it arrives.  He said he would be back in an hour, suggested I have a shower in the worker’s portable cabin.  I smelt my underarm when he left and realised he had a point about the shower.  I had been typing, all the while sweat was running down my face and I had soaked a dry flannel in minutes.  It was only 37°c and that would not normally bother me much; which was a little puzzling.

Then I realised I was camped next to a huge river which caused the air to be very humid.  I revelled in the delightful shower, mopped the floor afterwards and started sweating with the effort of doing such a simple thing.  When I came back there was a loud nock on the motorhome door and the boss man indicated I got into his transit sized tipper truck, which had a good sized motor boat on a trailer in tow.  He called in at a petrol station and filled the boats tank, then went back to the old quay where the Banana was.  Whilst he was unloading his speed boat I tipped the Banana and untangled the ropes.  I eventually got the Banana into a good position and it was pulled at the rear of the speed boat.

We set of at such a speed I had to ask him to slow, so I could attach the rope.  He clearly was a busy man and needed to get back to his job, so I was left to get the Banana sorted out and positioned ready for the incoming pusher tug.  Happy the Banana was well secured; I went back to the motor home to keep a vigil.  The barge pusher tug arrived and when it was attached to the barge I went over to the jetty.

On board the tug I finally met the captain and was invited into the crew’s quarters, air con on full keeping the unwatched television nice and cool; he was a very nice man who made every effort to give me a good hearing, even laughing at my attempts at jokes in German.  And so, ‘will you take me with you’.  ‘No, too many risks’.  I won another hearing, granted in front of the third captain, who would decide.

He had made a lot of excuses why he couldn’t take me, such as, it would be too difficult to get the Banana on board.  I left the ship with an agreement to return around 2pm, so I went off to spend the last of my local currency on basic food and diesel for the motorhome.  The barge was still being loaded, with lorries coming at irregular intervals.  So I sat in the motorhome, typed this, swatted the horse flies that had temporality given the mosquitoes the afternoon off, and sweated.

The afternoon wore on, I visited the ship several times, waiting in the cool crew cabin, talking to a young man who had joined the ship just a few weeks before and was regretting it.  He clearly was being bullied and used to do all the stuff no one else wanted to do; he had been working very long hours and was waiting for his one-month contract to come to an end so he could leave and go home.  I asked what was going on with the other two under captains and he just shrugged and said they were in bed, they were full of their own importance and didn’t give a thought about anyone else.  My impression of two of them agreed with this viagra a vendre quebec.  Eventually I spoke to the first captain who said the other two didn’t want to take me.  I said ‘ok, no is no, thank you for being clear’ but went on to ask why it was they thought it would be a problem, because if I knew the problem I could find a way of solving it before asking for a lift with another ship.  He understood this, and explained the difficulties for a ship crossing into Croatia.  It is not for this blog to explain what the problems are, but getting around them is not going to be easy.  Apart from getting some shopping done I felt the day had been put to little use.

Back I the motorhome I set to sorting out some basic stuff, washing clothes, killing bugs and cleaning my blood streaks off the splats they left on the inside of the motorhome.  I went back to the town to get a Chinese meal in my favourite fast food resto on the high street.  The woman, who doesn’t  want to be photographed, is one of the happies people I have ever met; laughing at not being able to speak, grinning at my impression of a chicken, and making cooing sounds as she worked preparing the meals.  She dropped some serviettes and cooed ‘hum he ha hah oooo he ouie yey ha’ te hee’.  She looked up at me to see if I had noticed and laughed even more.

She piled food on my plate and chirruped like a contented bird when she brought the 2.50 euros excellent sweet and sour fish with egg fried rice.  I had paid more in commission to change my euros than the price of the meal which I reflected on whilst eating.  Wouldn’t it be a good thing to have one worldwide money?  Just think of all the wasted cost and profiteering money exchangers take from our economy; banks, stock exchanges and people sitting in little boxes full of bits of paper and coins could all go and do something useful.  ‘Save the pound’ and make a banker wealthy.   Maybe the sooner I get back on the Banana and off my soap box the better.