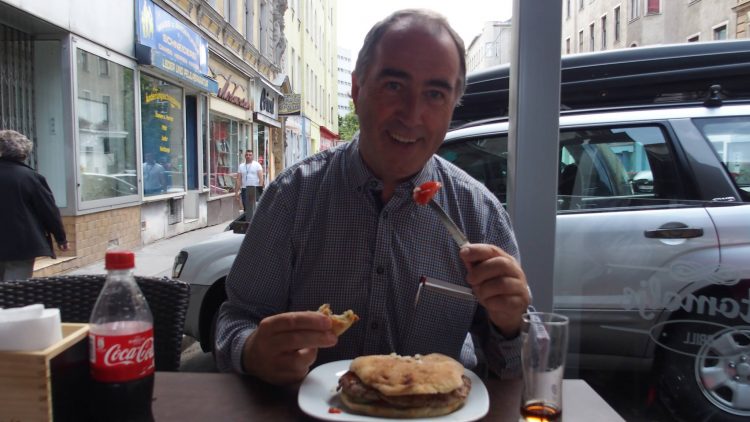 I had a leisurely breakfast, shaved and made the best of myself, organised camera equipment etc. and set off for the Hilton, in the certain knowledge I would not be going anywhere today, boat or no.

Even with the laid back morning I had taken, I arrived in the hotel before the conferences started and I decided to film background shots of the many suites of conference rooms.  People started to arrive for their day and I got some shots of them without showing faces etc. which showed the hotel in use.  One woman came out of a lift as I was filming the foyer.  I took the shot again as she had walked right across the shot.

I moved around filming from various angles the open spaces, bars, restaurants and waterfront lounges.  The same woman managed to walk into shot five times.  The last time I very politely said this must be some sort of record and would she like to sign a waiver form?  She said she was looking for a computer part but could not find one?  I still am not sure what she was about.

I had a chat with the staff on reception who told me there would have to be email confirmation, which eventually came around lunch time.  I asked several members of staff if they would like to be interviewed on camera.  Hilton had given permission for this on the understanding that those involved signed waver forms and were happy to be involved.  Without exception they all said they would have to ask their line manager, which is reasonable.  Several line managers simply said no you can’t unless permission was sought from above.

When I explained that this had been done and they would have had an email to this effect they mostly relented, however two of them said that the person involved would have to do the interview in their own time.  I did not go back the people who had this condition put on them and eventually interviewed a good cross section of staff from new intern to General Manager.  The staff really do get on with a heavy work load and are completely dedicated to doing this.

In the end it took all day to get five good interviews, waiting around until they were free for a few minutes.  I was impressed by their comments about working for Hilton, and all expressed in various ways the care the company takes of its workers, always seeking to find the best post for them and even allowing freedom of movement between countries.  I was given a conference suite to set up the interviews which really helped both in the filming and in the way I could conduct the interviews.

Darning the late afternoon, the River Concerto returned to the quay as I had been told it would.  I went along to have a word with the captain to see if, because the ship had no passengers at that point, if he would take the Banana along his route East.  He really liked the idea but had his hands tied because the ship had been charted and he could not take anyone on board without permission.  We exchanged email addresses and I left.

I ended my day surprisingly tired but happy with the results of the filming, so set off back towards the car park only to see a ship had berthed against the quay.  I put my camera equipment away and went to have a chat.  They agreed to take me to their next stop down river, wherever that would be.

They were leaving the following morning early, so I set my alarm for 5.50am and set about sorting out the video files.