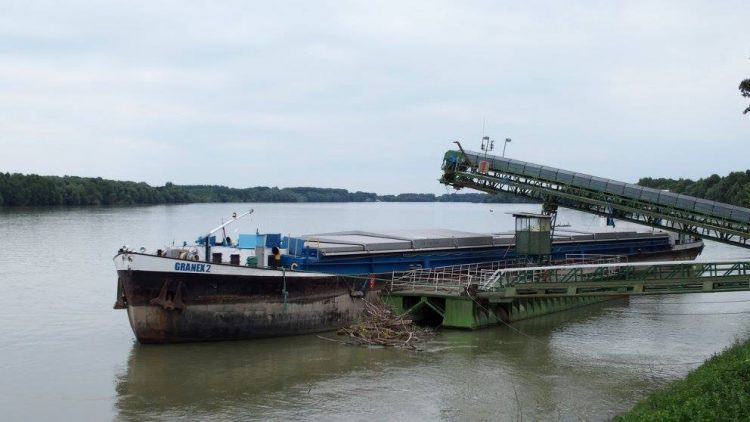 I had an instant desire to smash my phone when it innocently did as I had told it to do and set off its alarm function; exactly at the time I had set.  I resisted the temptation and got out of bed instead.

The crew of the Gravex 2 were nicely still in bed, which gave me the time to set up my travel bag and have several cups of coffee.  I went to the Banana and struggled with it against the flow of the river, stumbling on the snake filled loose, slippy rocks and tree branch snags until hot and sweaty I got the Banana next to the quay.  The crew emerged, had their cigarettes and set to putting the Banana on deck.  Time for one more coffee and make arrangements for the motorhome, get my bags and climb on board.

The ship was let loose from the quay and sung into the fast current to turn 180° to the East and head off out of Vienna; soon to leave Austria behind for an unknown destination somewhere down river.  I stood on the rear deck, next to the Banana feeling a mixture of excitement and contentment at the same time.  I am always excited about moving on, with a boyish sense of adventure and a no worries, everything will be alright, don’t really care if it isn’t attitude.

The contentment came from simply being in a place, at least for one day, where whatever else is going on in the world, it is not going to bother me today.  I am, for the next few precious hours, absolutely unable to do anything other than be carried along with the ship. I could film when I wanted and the only outside interference would come from my telephone which I had to keep switched on.  I carry with me a note book; using the computer on board is not practical.

Getting off a ship onto the Banana then rowing ashore is not easy at the best of times, but to have expensive, easily damaged kit with me is has proved no easy task.  I went into the wheel house and was told I could sit on the chair in the corner; a good place to sit and take notes from an excellent advantage point out of the way of everyone.

The Chair.  Too high for me to put my feet on the floor, the old office swivel chair with it five jammed wheels on bent legs had a seat that sloped forwards at about 25° off the horizontal.  Several attempts had been made to make it comfortable, one of which was the addition of a cover made of foam held together with an old blanket.  This provided an excellent medium for me to slide off towards the controls infront of me.

The bank of ancient buttons did simple things like shut down the generator, start the bow thrusters or stop the main engine; not something I wanted to be catapulted onto.  The other aid to comfort was a small wooden shelf loosely screwed to the panel holding all the switches.  It was set for someone with legs half as long as mine so I had a choice of sitting with my knees under my chin or sliding off forwards every two minutes or so.  Either way blood was cut off from various parts of legs or bum depending which way I positioned myself.  I resigned myself to loosing quite a lot of body function and made notes as best I could.  Lucien, the captain, almost chain smoked.

Fortunately for me there was a draft coming in from the window next to me which protected me quite a lot.  It turned out the draft was from the gap between the adjustable roof, which can be lowered by hydraulically operated chains to get under low bridges.  To steady myself on my ricky perch whilst impossibly trying to find a more comfortable position I put my hand on the lower part of the contraption, pulled myself up and steadied the chairs attempt to throw me into Lucians lap.

The chair stopped wobbling, I put my hand on my knee to relieve my stomach muscles and BANG, the roof dropped about 75cm.  Lucian turned to me smiling and said that is does that from time to time, as there is a problem with the seal on the hydraulic ram.  I inspected at my intact hand with new interest as though it had been crushed or worse; the guillotine had fallen just a few seconds after I moved it out of the way and I could feel quasi post trauma tingling in my fingers as I imagined what nearly happened.

The rest of the voyage was smoke filled with breaks for food.  Florin, the sailor, prepared a Romainina bean and potato broth with pork ribs – superb!  I ate alone and returned to the wheel house.  I made many pages of notes which will be in the book, the views from the ship ranging from spectacular to basicly monotonous, which is why so many cruise ship passengers will wave at anyone.  The Danube ‘canal’ starts as almost a lake, with round islands made of stone to guide the ships through what must be a maze of sand banks and hidden islands.  There was no way it looked like a canal to me, all could see was a wide expanse of water, with a flock of thousands of swans floating together more than half a kilometre away and cormorants suddenly appearing and disappearing in the river or flying to their perches on half submerged dead trees.

Eventually in the distance on each side of the ship I could see man made banks looking like low dam walls.  As time went on these walls came closer and closer together and eventually formed what I recognise as a canal.  The huge construction led to a hydroelectric power station and a massive lock system that could take ten ships.  I filmed this and went back to the Smokey wheelhouse.  A few hours later, having stopped for the lock to release the ships going up river, we passed the confluence of the canal and the Danube itself, the part the dam builders let flow down its natural course.

As the day wore on Lucian announce our destination, Komarom, or Komarno, depending which side of the river you stop.  With Hungary on the right bank and Slovakia on the left, connected by a bridge and disconnected by language, currency and politics it brought home the advantages of living in a unified monetary system.  I found an exchange bureau and paid their wages for sitting there all day, just to have some cash in pocket. I wondered how many people do nothing but change money and make a good living off all of us who have to pay just to use the money in my pocket.  In the short term it provides employment for many people, in the long term it makes life more expensive because everybody pays to keep people who do not produce anything whatsoever.  I include in this the Banks who will fight to keep various currencies, the pound in the UK for example, because they can buy and sell it at our expense.

I went to Tesco’s superstore and arranged for the motorhome to be delivered there.  I found one person who could speak English.  He explained that I had better order food now as soon it will all be gone.  I looked at the counter in the Chinese snack resto and thought they won’t ever sell all that this evening.  As 7pm came nearer a huge line of people formed to take advantage of a special offer; all meals half price afterwards.  The price for a huge plateful was 3 euros (in florins) so I took the advice.

The café sold out in about 15 minutes.  I spoke to a man who was holding his baby girl.  He told me he was not Hungarian so could not work.  His wife was so he gave up the chance to work in his home country to be with his family, although this was financially very difficult.  Another person on the wrong side of a border, trying to make ends meet and get some discount food.

I went back to the car park to see the motorhome arrive, and drove back to the ship.  The crew were watching football so I set up the awning and sat outside with my guitar.  Within minutes a man came and indicated that it was illegal to part there.  I offered a beer and played guitar.  He put his beer down after a few minutes and went off towards a crane floating further down the river.

He came back fifteen minutes later with his wife. They sang and danced all night with me, the captian of a nearby German ship sat outside and listened too.  1am I headed off to bed.