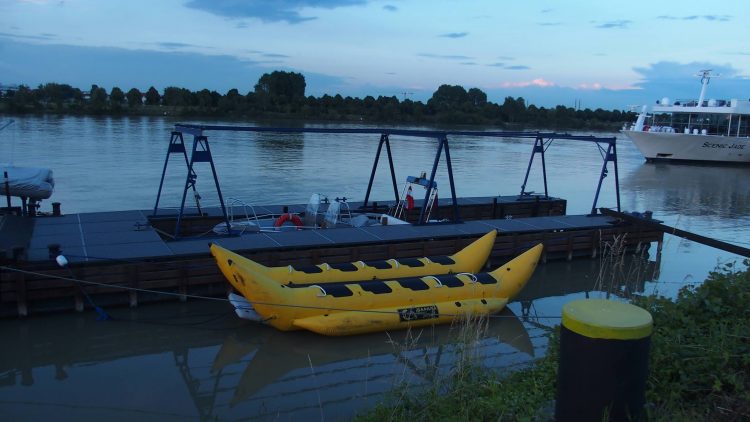 I left the motorhome having tidied up the gathering piles of tangled wires and plugs for charging various bits of equipment, and went to use the internet in the Hilton.  The very nature of hotel life prohibits personal contact, so I only took the hand held selfie camera for personal shots and abandoned temporally the idea of the voyages main interest; meeting people on or around the river route.  I spent most of the day working on the desk in the computer lounge.

Very comfortable but as my budget does not include hotel service I returned occasionally to the motorhome for coffee and sandwiches, also keeping an eye on the quay to see if any ships had tied up there.

The late afternoon was spent exploring the suburbs of Vienna and the area where there were plenty of kebab shops.  Again it was difficult to meet people, any city is a solitary place and the few people who could speak English were not interested in a brief encounter with someone who would move on soon.  I went back to the wharf and explored the complex of buildings where the river cruise offices sell their tickets for days on the river or longer voyages on the larger cruise ships.  I noted that ‘Rubbish’ ships had an office there too.  Around 6pm I thought I would go and have some fun and see if the police had become bored with playing with the Banana.

I was met by an officer with a sheepish look on his face.  He waved a three-page file at me and said that they had found the Banana.  I said it was not lost.  He looked embarrassed and turned to examine the pages in his hand which he read for a moment, then announced that the Banana was in the Danube and had to be brought to safety.  I pointed out the speed the river would have taken it out of Vienna at 7 km per hour, ten minutes would have had it beyond the main river bridge.

I would not have stayed bobbing around next to the quay.  He nodded.  I showed him photos of the Banana securely tied up with eight ropes connecting to two principle ropes fastened to a steel post, holding the Banana on the stone stairs leading to the river.  Again he nodded, and looked back at the report in his hand.  He said that the officers didn’t know who it belonged to so they brought it in.  I told him I called to them and they just made a dismissive wave and went off.

He now looked very uncomfortable at this and told me the police would have stopped if they saw the owner of something ‘found’ on the river.  I asked him if he wanted to the footage from both cameras, filmed in 4k ultra high definition, showing the faces of the officers full screen and them slowing then going off after they had heard me tell them it was my Banana.  He stared at his feet for a moment, then threw the file dismissively onto his desk and put his hands in his pockets.

He gestured to his boss; a surly man with a beard which made him look surly.  They grunted some remarks together, looking across at the file occasionally.  Mr surly left his officer to do the paperwork.  I was asked to sign a form saying I had been given the Banana back, which I did.

I was told I could go now and take the Banana with me.  When I explained that it had no motor and could not move under is own power, he examined the ceiling for a solution.  He nodded again when I suggested that, as they had brought it here, perhaps they should take it back to where they should not have taken it from in the first place.  He radioed he collegues I was on my way and told me to ask them to take the Banana back.

Two officers, I don’t know their names so I will accurately refer to them a Stan and Oliver.  The larger, Oliver,  told me straight away they could not tow the Banana with their little police boat and they did not have the keys to the larger boat.  I said ok, keep the Banana for a few days until I sort something out.

‘No, can’t; the river is too fast and too dangerous here’.

‘You cannot leave it here’.

‘Yes I can; see you tomorrow or the next day’

They started to untie the Banana.

I asked them what they thought they were going to do

‘push the Banana out for you then you have to take it; it is not our problem.

‘If you push it out, it will be your problem very soon, especially if it gets tangled up in a ships propeller’

Stan stepped onto the Banana tried to get it to go under a wooden pole which was too low for the Banana to pass under, whilst Oliver pushed his cap forward on his head and tried very hard to think.

I took the rope and tied the Banana back to the jetty, and set off saying there was no way I was getting on the Banana, without a life jacket and something towing it with an engine.  Stan looked dismayed and had a brief conversation with Oliver.  He had not thought of any solution to his problem of getting rid of the Banana easily and eventually told me to untie the Banana.  I said ‘No’. He was shocked at this and explained that he had changed his mind and decided the small police boat could tow the Banana and they would take it back.  I untied the rope and they messed around with great difficulty trying to get the points of the Banana under the pole.  Half an hour later they managed it and fooled around for another fifteen minutes changing the position of the boat to get the Banana alongside; sadly I could not film this as I assisted several times in stopping the Banana drifting away or stopping the ropes getting tangled in the propeller.  With hind sight I regret this as it was really funny.

Finally, they sped off and I ran to get my selfie camera.  Walking the one and a half kilometres back to the original starting place I missed their arrival.  They were clinging on to the quay, about 200m from the place where the Banana had been; a large passenger ship was blocking entry of the little boat and they had had to wait for me.  I set up the TV camera but messed up the setting in my haste.

They took off leaving me with the Banana tied to a post, still in the river.  I let it drift under the ships ropes, pulled it around and hoisted it onto the bank, exactly where it had been.  Job done; I returned to the motorhome happy that all the details of the event will fill quite a few pages of the book, because as always as so much has been left out here.

Back to the hotel to post a few photos, then I went back to the motorhome to sort out my evening meal.  On the way back I received a text from the Hilton HQ, ‘hi Les. It is approved for Hilton. Just got the conformation. I might need info for paperwork.  Tea’.  She also sent an email which I picked up later, saying the same thing with the added words ‘ …have fun.’  I thought to myself, I will.