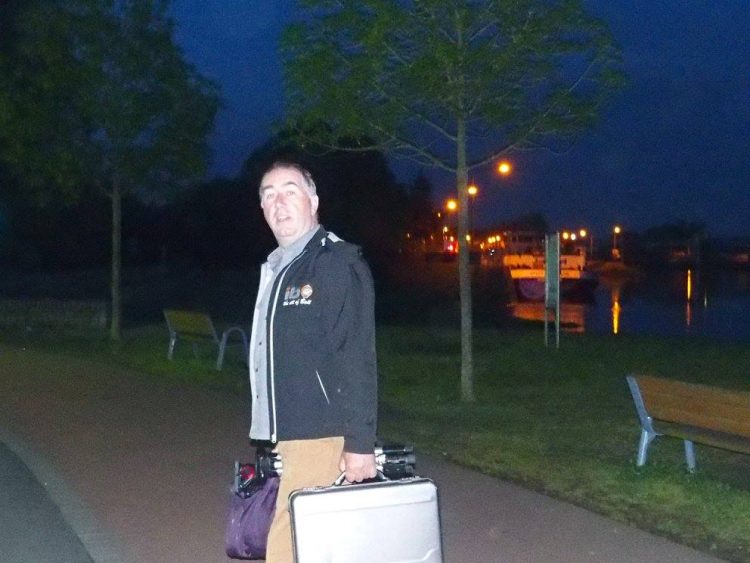 4:45 came far too early!  I tortured myself out of bed, got my bits and pieces together and walked across the car park to the waiting boat as the engines started to fire up and the crew busied with the preparations for getting underway.

I put my main camera on board and set myself up in the wheel house, trying to keep out of the way.  Before I realised the ship slipped away from the quay and, as the lock was open, we slowly edged through the tiny opening.  At 12m wide it was a tiny aperture because the ship was 11.75m wide.

Our 14 hr voyage to Bamberg had begun, and I felt sleepy.  Long but delightful hours passed, the scenery changing all the time from small towns to factories set on the river for easy access to the heavy materials the river ships can provide.  Coal fired power stations and many caravan parks with lines of motorhomes lined the banks on each side as we glided along making wide turns in the narrowing channel and pushing against the current which sometimes slowed the ship to 8.5km/h.  our conversation, almost entirely in English, flowed as easily as the river itself.

Darios is of Argentinian origin and at times he has had abuse and on one occasion was attacked by racists when travelling on a train in Germany.  When I asked him if he had visited the UK he said no, because of a fear of being attacked again not only for looking ‘foreign’ but because he thought people would remember the war with Argentina; and that would be an excuse to attack him.

I spoke of the abuse I had in a bar in Duisburg and he said that town was particularly bad because there was little work and it has become depressed, dirty and grey.  My observations entirely.  His wife had also had problems not because of her origins, she is German, but because she was smartly dressed in a supermarket and a drunk was resentful of her apparent affluence.

We discussed the politics of the river, not enough investment in shipping too much of the expenditure going on tourism.  In a fourteen-hour journey, even with occasional languages difficulties almost every subject ended up being covered even though the rule on most ships is no religion, sport or politics.  In one of the locks Darius left the wheelhouse, returning to tell me lunch was served in his quarters.  When I got below a traditional Serbian sausage goulash was waiting for me with all the trimmings.

The afternoon was spent trying not to doze off; I ate too much even though I did not finnish much more than half of the meal.  The warm cabin gently rocking ship with the engins steadily humming in the backgroung and the banks of the river hypnotically slipping by made staying awake difficult.  I went out on deck several time to film various features and to get some back ground footage showing the beauty of the scenery and life on the river bank as seen from the water.

Frequent cups of coffee from a large thermos kept me going into the night.  Darius was tired but because of a machine breaking down whilst the ship was being unloaded his schedule was out by two days and he had a dead line to meet: his month on the river was coming to an end and the ship would be taken over by another captain in two days’ time: complete with new crew.

Night fell with a pleasant sunset behind the ship.  The river became ever narrower and the forest seemed to crowd down into the water.  The ships lights penetrated the woods on each side and the banks of the river took on a fairyland quality, with dark secrets of the forest behind the glimpses between branches of a mysterious world beyond.

Texts and phone calls directed the motor home to the destination quay and with the briefest good night I climbed off the ship onto the quay to get myself the three and a half hours sleep available before the 4am start the next day.  Too tired to eat I got into bed put my head on the pillow and my alarm rang apparently instantly.