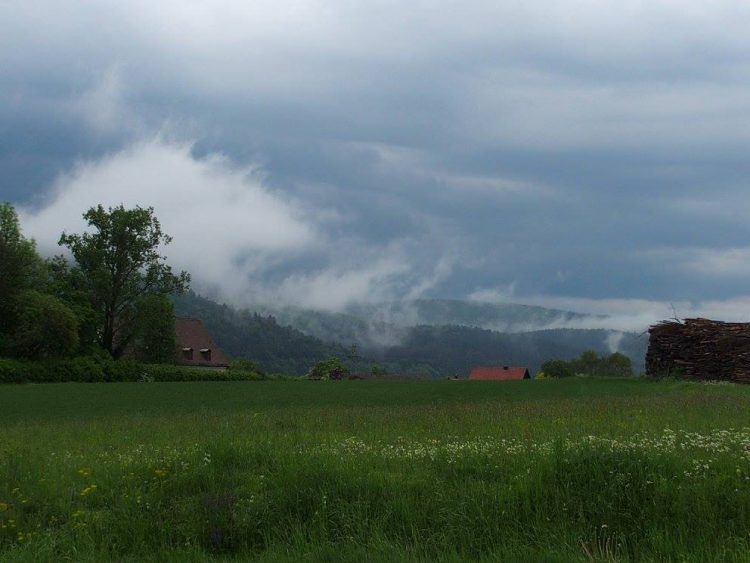 Friday the 13th actually turned out to be a lucky day for the Banana Voyage.  Sitting in the motorhome, listening to the rain, writing up notes and drinking far too much coffee, I did not hold out too much hope of getting a tow out of the Lock at Harrback.  The events of the day before had left the Banana on the grass at the top of the Lock, the place that ships pass as they build up speed to get out of the channel and into the full flowing river; not a place to stop and pick up a hitch hiking Banana.

Only four ships came through the lock in the early morning.  From first light, around 5am, as ships approached, I got my things together and ran the 600m to where the ship makes it final berthing.  With the wheel house below and the captains head out of sight, communication is difficult, especially using their second or third language.  One of the ships was a gas tanker another was a cruise ship, neither could take me because of special regulations, but I suspected their reluctance to listen had another cause lurking behind their decision making.  This was more or less confirmed when the fouth ship came along and the captain waved me away before I had chance to speak to him.

Being Friday many of the ships crews stop for the weekend if they can, so traffic was much reduced.  I waited for another two hours before a police car turned up on the tow path near where I had parked the motorhome.

He got out of his car with note book in hand: not a good sign.  I greeted him cheerily and asked where the other officers were who had been so helpful the day before.  ‘Oh, you’re the chap with the Banana, can I have one of your stickers: I would like to follow you on your site, like my colleagues’?  I presented a sticker, and asked why he had come.  He explained that the lock keeper said I could not leave the motorhome on this side.  I said I would move it if he wanted me to, but where could I be near enough to the ships to get a tow out of the lock?  He agreed it would be difficult anywhere else.  I suggested I get a ship as soon as possible and just go – no problem.  He left happily with his sticker, saying he would keep in touch.  After he left I got my 4m high Go Banana flag out and stuck it defiantly into a perfectly placed hole in the lock, just in line with one of the security cameras.

The afternoon wore on as several ships came along, all refused to tow the Banana without listening.  The Beluga 2 chugged into view and came close to the approach wharf.  I walked alongside them as they made ready to wait for the lock to open.  They did not want to tow the Banana because it was illegal to do so, I told them it wasn’t and that I had been towed 700km with no real problems.  They thought about it and decided they would have to contact HQ.  After the Beluga 2 had gone through the lock I realised there really was something going on; so when the next ship came along I changed the way I approached the subject of being towed and started with: ‘I really want to get out of this lock because of the lock keeper calling the police several times’.

This caught the interest of a captain of a ship pushing a barge, 172m long in all.  He asked what happened with the police and I said I had promised them I would not press charges as they had negotiated the passage and helped me through the lock.  He nodded knowingly and said he had had trouble with this person too.  Dario, the captain, said he would take me to the next lock and I said I would more than gladly go anywhere to get away from there.

I passed my bag onto the ship and ran along the lock to get across to the grassy island before the lock gates could be opened, which would prevent me getting to the Banana.  I pushed the Banana into the water, threw the ropes to the passing ship’s crew and ran to the lock side to jump onto the ship just before it cleared the lock completely.

The captain asked his three sailors to use the crane to lift the Banana on deck and we were off out of the lock.  In the wheel house he soon told me that the lock keeper had radioed that it was illegal for him to pull the Banana and he would get a heavy fine if he did.  The captain decided that there would be no fine for taking cargo on board a cargo ship.  Game over.

Dario invited me to stay with the ship for three locks, just to where they would stop for the night.  I arranged for the motorhome to be there and settled down to enjoy the trip through some beautiful German countryside.  The river is much narrower than the Rhine and I noted from the ship’s instruments that the depth of the water under the ship was often no more than 1.5m deep.  As the journey continued we chatted easily and by the time we were in range of my last lock before they stopped for the night I was invited to re-join the ship the next day to continue to Bamberg; leaving at 5am sharp.

I was disorientated and had lost track of the towns and villages we were passing through; I was grateful that this was a Banana voyage and not an attempt to make a geographical documentary about every habitation along the river route.  We passed through a larger than usual town, passed under the town centre bridge and entered a lock.  As we left the lock one of the sailors appeared with a bag full of Kebabs for everyone, including a very grateful me.  Apparently he had jumped off the ship onto the river walk which had no fence and timed his order perfectly to be back at the ship before it left the lock.

We didn’t not make the progress that we had hoped and, by calling ahead, also discovered that the intended destination could not be used because there was no space for a ship of this size.  We pressed on to Randensacker, a charming small town with several café’s and a hotel.  I found the motorhome and immediately went to work on the blog for my website.   About an hour later l went in search of an internet connection.  Eventually I persuaded a hotel with a bar to let me use theirs.

I downloaded my blog, sent some emails and looked over my Facebook page.  To say thank you for the favour of using the internet I got my guitar from the motorhome and sang some songs for half an hour.  They wanted me to continue, but I was very aware that I would have to be up early.  I eventually got four hours sleep.