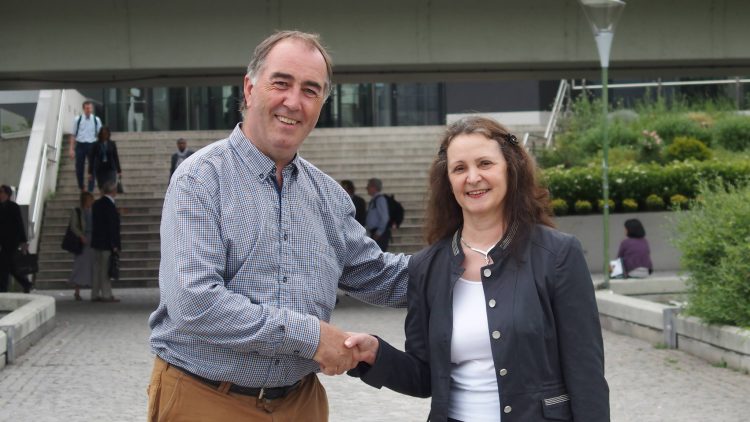 Up early and off to the UN building to meet up with their representative for media and publicity.  I explored further around the suburbs for so long I lost track of time, and had lunch in a Turkish grill.  I could not finish the 25cm diameter burger, costing five euros.  I filmed the cosmopolitan life around a large church and grounds and made my way to the underground station.

At the UN building I met one of the heavily armed security guards who directed me to the security control at the main entrance where I passed through an airport style baggage check.  I went through to a foyer with some shops and a coffee machine.

I found an intercom telephone and called the woman I had emailed several times over the last six months.  She suggested I might be interested in meeting a man who was directing the improvements and alterations to the Danube river.  I agreed that his work would fit in very well with my filming so she gave me his extension number.

I left a message on his answered phone and waited for him to call, for an hour I watched the well-dressed workers and delegates wander around importantly carrying bits of A4 paper to the next meeting or whatever.  I phone again, several times then noticed that the time had gone on passed 4.30 and guessed he had gone home.

I called the media lady and explained I thought he had left the building and agreed that this was likely.  I asked her if she would do the interview I had originally planned and she agreed.  We met on the lawn in front of the UN and chatted for a while before recording a conversation.

After we finished recording we continued a lively conversation for another hours or so.  She left and I made some general shots of the surrounding buildings and made my way back to the underground to re-cross the river and return to the Hilton to see if there was any news.  On the way back I looked in on the Banana and found some American people looking at it.  I had lively interview with the two couples, which included monkey impersonations.

I arrived at the Hilton but the General manager was not available so I left and went back to the motorhome.  I played my game of waving at passing passenger cruise ships to see how many people would wave at me if I waved first.  My record is eight at one go, which I did not beat.  Bed!