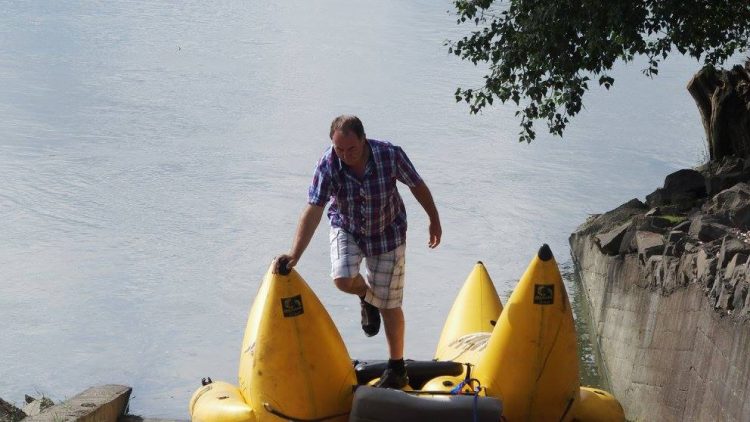 I was ready to go a 6pm; the crew wasn’t.  The sun rose through a low mist over the river which made the distant shoreline cranes look spectacular, like a Turner painting.  The mist cleared a little and by the time the ship was underway the sun was warm enough for me to sit outside comfortably and simply enjoy the view, gladly exchanging cigarette smoke for the diesel fumes from the engine exhaust.

The morning wore on and the scenery became spectacular.   I filmed, and eventually returned to the wheel house as the wind grew stronger and it was unpleasant to stay outside. Where the river turned into a head wind, moderate waves formed and bounced the ship around, visibly bending it and sending it off in different directions when as it changed.  I took more notes and filmed outside as we went straight through Bratislava.

My phone told me when I crossed over boarders, but there was no physical sign that I had done so.  Hours later Budapest was announced and I went up on deck, not really expecting to film very much as I don’t see my video to be a blow by blow documentary of all the monuments and buildings of the whole of Europe.  I filmed until the memory was full, then got another card.  The city is beautiful, and, from the view from the river, spectacular.

The river turned due south and the waters calmed as the wind now came at 90° to the ship, making steering difficult as the empty ship blew off coarse easily.

I returned to my chair, carefully didn’t put my hand anywhere near the window, and took notes.  Lucian asked what on earth could I be writing about?  ‘There is only river, two river banks with trees and sky’.  I asked if he could see the little bird on the hold cover.  He nodded.  I said if he watched he would see it attrack another one hiding from it under a ladder just to the right.  Just as he saw the second bird (a wagtail I think; what bird watchers call a LBJ) the little bully pounced and the other literally took flight and raced off over the water to the distant right bank.  Lucian looked shocked that I knew what the bird would do.  I just said ‘observation’.  He stared at me for a brief second and gave me a curious look before returning to putting the ship back on coarse against the winds interference.

A few hours later Lucian looked at his watch and wound the ships throttle up a few degrees, the engine responded happily and the speed increased from 18 to 22 km/h.  an hour later he throttled back, the crew appeared and the ship was turned 180° once more into the current of the river.  When docked they all gathered around the Banana and I got all my things together.  With my hands full there was not much for me to do.  They had tied the tow rope to the rail of the ship and were about to push the Banana into the river.  I indicated this would make the Banana flip over, but wrongly they thought differently.

I switched the camera on to capture this but they beat me to it and in one shove, flipped the Banana over into the river.  Lucian gave a me a similar look to the one earlier, then laughed.  I switched off the camera and helped pull the Banana back to the ship and with four of us, push it over, back to the right way up.  I had mentioned the ropes would also get tangled if they did this and again I was right; this was not the first time I had done this.

They pulled the tangled ropes and I filmed again; following them around the ship so that the Banana could be pulled up onto a launch ramp, which I had seen about 30m off the bow.  Getting the rope ashore across a pontoon bridge, along the bank and onto the ramp caused great deal of laughter as they discovered how something so simple could be so difficult.  Florin struggled in a similar way to me the day before in Vienna, Peter and Lucian finding it all very funny.  I completely failed at not laughing too.

The deal was that I left the ship here at Paks, as they were to be loaded in a few days and they expected me to find another ship.

I messed up directions for the motorhome and ended up going for a very long walk, which included a jaunt along a railway line, a trip through a maize field and a clamber up a steep grassy bank with slippy sandals on my feet and thistles to hold onto to steady myself with.  The mosquitos disturbed by my passage joined in with the horse flies from the nearby sewage works to refresh themselves on various bodily fluids, midges just took pleasure in committing suicide in my eyes.

As I got to the top of the dyke (as it turned out to be) I got a text message saying the motorhome had just arrived at the dock.  I had mixed feelings about this.

Back at the dock, I found the ‘night watchman’ who made out he was in charge of the port.  Later he told me he lived in the small container like cabin and slept in his car, he guarded the site to have permission to live there and he had permission to fish.  The crew had all gone to their quarters so I had a look around at where I was.

It was clearly a port to load ships with grain, with several old quays with loading facilities and a brand new dock being built m away with modern warehouses placed around the whole complex with a suite of offices and an apartment above.  I planned to go to talk to the boss there, but it was closed for the week-end.  There were two ships on the new dock waiting to be loaded and no sign of any activity.

I took the motorhome to the town 5km away and explored.  The shops would not take euros and I had to change my cash.  The bored woman took her commission without even looking at me and I left to find a bakery; I found a Tesco shop which took euros, with their commission naturally.

I was hot, bitten and travel weary so I ‘asked’ if there was a swimming pool in the town.  This involved an interpretation of Swan Lake; without the tights my performance on the high street attracted quite a crowd, none of whom spoke anything other than incompressible Hungarian; apparently the most difficult language in the world: lucky me.  There was a swimming pool called the beach, it was open until 8pm and I found it with ease; and with quite a bit of laughter.

3 euros (about seventeen million Hungarian wallpaper sheets with scowling bearded men on) got me into the beach, with its green sand carpet, Olympic sized pool and smaller pools for children etc., water shoot (not working) and two pizza cafés and a bar, all open air.  Heaven.  The attendants had Cherokee style paint on their faces and occasionally did a rain dance near a portable computer, set up near a kiosk.  It turned out there was a football match under way and when opportunities were missed or goals scored, they did a little dance of either frustration or joy.  Odd.  The paint was the Hungarian flag.  The pool had a colony of blue birds which were there to profit from the unfortunate horse flies from the sewage plant that had lost their way and gone for a drink in the pool, fell in and were picked up easily by the birds skimming the pool surface.

I thought about the trade-off between swimming in dead flies or bird poo; to be honest there isn’t much to do in an Olympic pool other than swim and watch the acrobatic birds and the antics of disappointed football fans.  Strange so many people follow football I thought: only one team can win whatever cup, everyone else is disappointed…very depressing for the greater majority of fans, no?

The good thing about a motorhome is there were bread rolls waiting for me to make into sandwiches right outside the pool.  The pizza cafés had closed; if fact the staff communicated I had two minutes to leave or they would lock me in.  They all drove away from the car park at 8.01pm.  Fortunately I had a shower in the open, mixed shower block at the side of the pool in good time, so I was ready to to go anyway.  I made my bread roll sandwiches costing 726 Hungarian thingys with beards and went back to the quay to visit the two ships waiting up stream.

I met the crew and captian of the two ships, owned by the same family who were working together.  They welcomed me and in conversation I was told they were going to Rotterdam and I could go with them.  Thanks.  I went back to my quay and found I could get a weak internet signal so spent the evening looking at the sunset, killing mosquitos and sending messages.