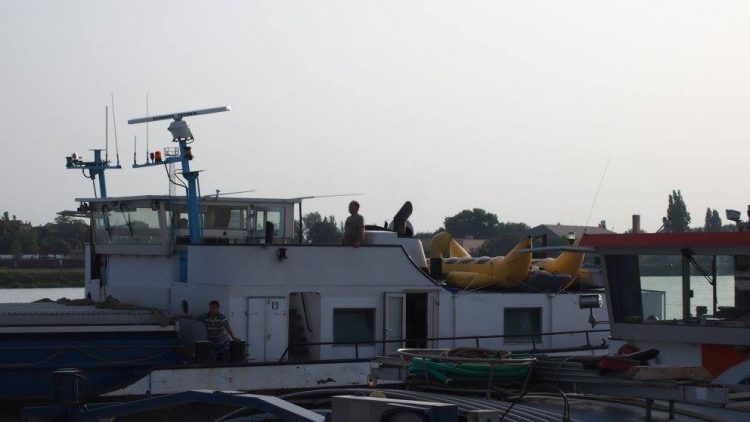 Out of bed before the alarm and feeling determined to get something done.  As usual this would be writing blogs and recording video files and wiping memory cards for more filming.  I have a horror of hitting the erase button, even though I know I have stored everything on two hard drives.  Wiping off originals is nerve wracking and I check all is well on the hard drives to be sure.

I thought that the dock would be quiet today, being the week-end.  Not at all; not only were those who had spent the night there, myself included, there were workers turning up in various vehicles, not seemingly a part of the dock team and I wondered what they were doing.  I don’ want to write about it here, nor have I filmed the activities of these people.

Whilst writing and getting annoyed at the internet not functioning all the time, I passed the day keeping a look out to see if any other ships had docked along the complex.  The crew of the Granex 2 were not at all visible and showed no interest in socialising.  I decided to wait until the evening to get out and about to explore a little.  I packed up the motorhome and set off for a marina I had seen from the ship just before we docked.  I arrive as boaters returned from their day on the river; they sailed onto the slipway and drove off as soon as their boats were on their trailers.  One group, chatted a little with me, and agreed to have a few moments on camera.  Whilst talking I noticed a man with two German shepherds.

They were very well trained and at his command they jumped over obstacles and even went into the river.  I asked if it was ok to film them.  He was delighted and proudly put the dogs throught their paces once again.  He watched the playback and wanted a copy.  I had nothing to store it on to give him and he didn’t have even a computer at home.  He marbelled at my equipment and kept asking how much things cost.  I find this difficult.  How do I explain I have something that cost what he earned in two years?

I went into the town centre and had a meal.  Later, I followed the sound of a PA system being set up and came to a suburb with well appointed houses with leafy driveways and well kept gardens.  The music was coming from behind the houses and, clearly there was an even in progress as there were cars parked in evey available space, on grass vergers and double parked along the road.   I drove away from the confusion and found a parking place about 1km further up the hill.

I walked back as the sun was setting and saw bright flashing lights illuminating smoke from cooking and BBQ’s  as it rose in the air.  I followed a group of people clearly going to an event and, passing through some alleys and narrow roads between the houses I came to what was an open piece of ground which had recently become a small rock festival, burgers and all.

The Band came on, there were speeches, followed by applause and then boom boom boom; euro rock at is best.  I bought a burger and a can of beer (just to blend in) and joined the crowd.  The band seemed to be well known and had decent kit, including two cameras similar to mine, but, as often is the case the European version of hard rock, it came across to me as a bit cheesey.   I went back to the dock to see if there were any new ships.  No; bed.