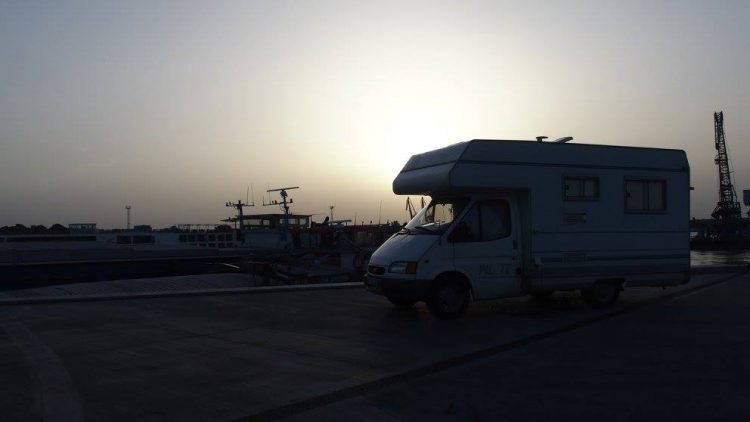 Apart from this being a special day numerically, Sunday was like a Sunday should be.  I pottered around the motorhome, charged batteries and did a little exploring around.  Daniel, the captain of the two ships in the next dock came along for a chat.  He invited me to park next to his ship to use his generator to charge up all my larger batteries.  He also agreed to let me use the on board washing machine; something I was very grateful for as it is a big problem in countries that don’t have laundrettes (that I could find).

I spent the afternoon with him and his colleague victor, discussing travel and all the countries Daniel had visited.  It would be a short list to recount the places he had not been to.  I was invited to watch television, but unfortunately Daniel wanted to show how many channels he could pick up with his satellite disc so I saw several seconds of hundreds of world wide programs.  When the football stated I made my excuses and left, not waiting some of the laundry to dry.

The sky had clouded over during the afternoon and a welcome storm started.  Back on the quay I decided to celebrate ‘nearly around Europe in 80 days’, toasted Jules Verne with one of my reaming bottles of champagne left over from the going away party and watched ‘Avatar’ on my computer again, giving thanks to Daniel for charging the batteries and being able to  run the fridge on mains meant the bubbly was nicely chilled.

I watched the cruise ships making their night voyages up the river to arrive in Budapest for the morning visits for their passengers.  Their lights reflected on the swirling waters of the Danube as I listened to their engines fighting the flow of this mighty river, and like the river drifting past, I drifted off to sleep les pilules de viagra.